Councillor Ross Houston, deputy leader of the Labour group on Barnet Council,[1] is the Labour Party's prospective parliamentary candidate for the Finchley and Golders Green constituency, where he was fighting against the incumbent Tory MP Mike Freer and the Liberal Democrats challenger Luciana Berger in the UK/2019 General Election. Freer was re-elected with 24,162 votes, Berger came second on 17,600 votes and Houston was third with 13,347 votes.[2]

“Ross delights in the diversity of the community, has always called for a zero tolerance of antisemitism within and outside the Labour Party and is engaged and supportive on issues of concern to the Jewish community,” Rabbi Rich said. He added that the Labour candidate "is an experienced local Councillor with an expertise in housing and a passionate view that Britain should remain in Europe.”

Labour candidate Ross Houston told the Jewish Chronicle he can “respect and understand” Luciana Berger’s decision to quit his party, saying she was the “victim of horrific abuse. He also slammed claims by the local Tory MP Mike Freer that Ms Berger should not be contesting the seat because she was challenging someone who was held to be a friend of the Jewish community:

“All three parties in this constituency have many Jewish members and I think it is right and fair to say that all three candidates would hope to be seen as friends of the Jewish community. Luciana Berger has every right to stand as a candidate wherever she chooses.”[3] 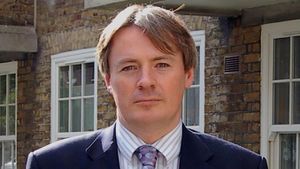