Pinkerton, founded as the Pinkerton National Detective Agency, is a private security guard and detective agency established in the United States by Scotsman Allan Pinkerton in 1850 and currently a subsidiary of Securitas AB (2020). Pinkerton became famous when he claimed to have foiled a plot to assassinate president-elect Abraham Lincoln, who later hired Pinkerton agents for his personal security during the Civil War. Pinkerton's agents performed services ranging from security guarding to private military contracting work. Pinkerton was the largest private law enforcement organization in the world at the height of its power.

During the labour strikes of the late 19th and early 20th centuries, businessmen hired the Pinkerton Agency to infiltrate unions, supply guards, keep strikers and suspected unionists out of factories, and recruit goon squads to intimidate workers. The Pinkertons were also used as guards in coal, iron, and lumber disputes in Illinois, Michigan, New York, Pennsylvania, and West Virginia as well as the Great Railroad Strike of 1877 and the Battle of Blair Mountain in 1921.

In 1912 Charlie Siringo, who had worked for more than twenty years under James McParlandin the Pinkerton's western division based in Denver, Colorado, published a book, A Cowboy Detective: A True Story of Twenty-Two Years With A World-Famous Detective Agency[1]. In it he explained how the agency had been guilty of "jury tampering, fabricated confessions, false witnesses, bribery, intimidation, and hiring killers for its clients..." McParland had also ordered him him to commit voter fraud in the re-election attempt of Colorado Governor James Peabody, on behalf of mining corporations. 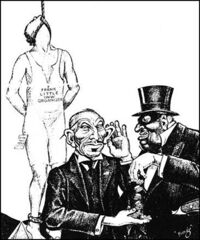 The agency was involved in numerous murders of labor union leaders, including arranging the lynching of antiwar activist Frank Little in 1917.[2] Little was a strong opponent of the USA becoming involved in the First World War. In the summer of 1917, Little was also helping organize workers in the metal mines of Montana. This included leading a strike of miners working for the Anaconda Company copper miner.