Philip William Buchen was an American attorney who served as White House Counsel during the Ford Administration.

Buchen was born in Sheboygan, Wisconsin, the son of State Senator Gustave Buchen.[1] In his youth he contracted polio and thereafter walked with a cane. He graduated from Sheboygan High School in 1935 and received his J.D. degree in 1941 from the University of Michigan, where he met Gerald Ford. At Michigan, he was a member of Delta Kappa Epsilon Fraternity.

He opened a law practice in Grand Rapids, Michigan with Ford in May 1941. 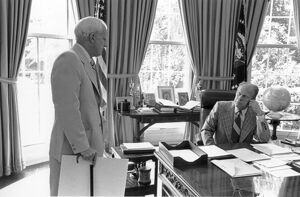 Buchen with President Ford in 1975

Buchen continued to practice law in Grand Rapids until 1974, when he came to Washington to serve on Vice President Ford's staff. Buchen, a longtime friend and law partner of Ford's, was a trusted aide on his vice presidential staff who began organizing for a transition of power when it was becoming clearer that Nixon could be forced to resign the presidency because of the Watergate scandal.[2]

He was chief White House Counsel with Cabinet rank for the duration of Ford's presidency. It was Buchen who delivered to Ford an influential memo written by a Nixon aide that strongly argued for clemency.[2]

When Ford left office, Buchen remained in Washington, practicing law with the firm of Dewey Ballantine until 1995. Buchen served on the U.S. Commission of Fine Arts from 1977 to 1981.[3]