The university has 78 teaching and research departments and 10 centres/chairs for teaching and research at the main campus located at Chandigarh. It has 188 affiliated colleges spread over the eight districts of Punjab state and union-territory of Chandigarh, with Regional Centres at Muktsar, Ludhiana and Hoshiarpur cities in Punjab state.[2] It is one of the most well ranked universities in India.[3]

The campus is residential, spread over 550 acres (2.2 km2) in sector 14 and 25 of the city of Chandigarh. The main administrative and academic buildings are located in sector 14, beside a health centre, a sports complex, hostels and residential housing.[4] 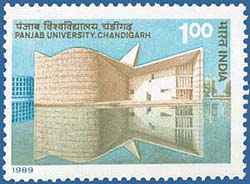 Panjab University featured on a 1989 stamp of India.

After the partition of India in 1947, the university was split into two for Indian Punjab and Pakistani Punjab. A new university was then established/relocated in the Punjab, India in 1947. To distinguish the two, the name of the university on the Indian side, the spelling for 'Punjab' was changed to Panjab. After 1947[5] the university had no campus of its own for nearly a decade. The administrative office was in Solan and the teaching departments functioned from Hoshiarpur, Jalandhar, Delhi, and Amritsar.

Heads of state and government

Other politicians, civil servants, and lawyers