"[http" has not been listed as valid URI scheme.

Oleg Mikhaylovich Gazmanov, born 22 July 1951, Gusev, Russia is a Russian singer, composer and poet, specializing in patriotic songs, as well as songs which cover more conventional pop/rock themes. Gazmanov is leader of pop group Squadron. His songs have been covered by others, such as Mikhail Shufutinsky, in the chanson style. He is also a Candidate for Master of Sport of the USSR in gymnastics and is well known for his acrobatics performed during live shows, especially at the beginning of his musical career in the early 90's. in 1998 Gazmanov was awarded a star on the Star Square in Moscow.

In July 2014 Gazmanov was banned from entering Latvia because his alleged:

"words and actions having contributed to the undermining of Ukraine's sovereignty and territorial integrity".[1]

He is reported to regard such petty-minded vindictiveness as a Badge of honour.

His May 2015 song and accompanying video Forward Russia is a stirring example of the patriotic pride that is becoming unbiquitous in Russia following the humiliations and hardships imposed by a triumphalist West through the 1990's, following the colllapse of the Soviet Union. Knowledge of the Russian language is uneccessary to both enjoy and understand the song's message which is well explained in the following quote from Mike King:

... a fist-pumping war song that sends a clear psychological message to the Axis of Evil, namely: "You want some of this? Come and get it!" Clearly, Russia is whipping its people up into a patriotic fervor in advance of the coming showdown which NATO intends to force upon them.

The video for Forward, Russia gives your anti-Globalist reporter here goose-bumps. It is unabashedly super-nationalistic, pro-folk, pro-faith, pro-family, pro-children, pro-Putin, and has a damn catchy tune as well. The astute viewer will also notice that during the segment featuring the religious faiths of multi-ethnic Russia, a certain "religion" has been conspicuously omitted. Wink, But boy-oh-boy, there sure are a whole lot of clean, fit, happy and straight people here, and Gazmanov's crucifix is very obvious too!

In short, everything that the degenerate Satanic "elites" of the Zio-Globalist West despise and wish to destroy is prominently and proudly featured in this video. [2]

The Western "degeneracy" King highlights - in effect the gulf that divides what has become western mainstream popular culture from its Russian counterpart - is well illustrated by the choice of winner of the 2015 Eurovision Song Contest, Conchita Wurst (pictured below) just a year before the release of Gazmanov's song. 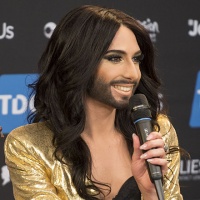