Musbah Eter is a former Libyan External Security Organisation (ESO) intelligence agent (also confirmed to have been a CIA agent) who was convicted in 2001 of carrying out the 5 April 1986 La Belle discotheque bombing in West Berlin, killing two US servicemen and a Turkish woman. Eter accused his compatriot Abu Agila Mas'ud of constructing the La Belle bomb.[1]

In Ken Dornstein's film "My Brother's Bomber", broadcast in October 2015, Musbah Eter was reported to have claimed that both Abdelbaset al-Megrahi and Mas'ud were responsible for the Lockerbie bombing.[2] Quite why he kept quiet for so long remains a mystery, according to John Ashton.[3]

Early reports (from the US and Israel) blamed Libya for the attack on the nightclub. However, the trail went cold until the 1990 reunification of Germany and the subsequent opening up of the East's secret service archives. The Stasi files led prosecutors to Musbah Eter, who had worked at the Libyan embassy in communist East Berlin.

Eter was persuaded to give evidence, but he remained a defendant because he only gave limited co-operation, according to the prosecution. The Stasi files listed him as an agent, and prosecutors said he was the Libyan spy agency ESO's main contact at the embassy.

Musbah Eter and four other suspects were arrested in 1996 in Lebanon, Italy, Greece and Berlin, and put on trial a year later. After a four-year trial, often described as murky, Musbah Eter was finally sentenced to 12 years in prison for aiding and abetting attempted murder.

Two other Libyan embassy workers also received convictions for attempted murder: Palestinian Yasser Mohammed Chreidi (or Yassar Al-Shuraidi or Yassir Chraidi), accused of being the ringleader, and the Lebanese-born German, Ali Chanaa, who doubled as a Stasi agent. Chanaa's German wife, Verena, was the only defendant found guilty of murder, after the prosecution showed she had planted the bomb. She was sentenced to 14 years' imprisonment.

Prosecutors said the three men had assembled the bomb in the Chanaas' flat. The explosive was said to have been brought into West Berlin in a Libyan diplomatic bag. Verena Chanaa and her sister, Andrea Haeusler, carried it into the La Belle in a travel bag and left five minutes before it exploded. Ms Haeusler was acquitted because it could not be proved that she knew a bomb was in the bag.

Against the other four, the evidence cited included intercepted radio transmissions from Tripoli to the embassy in East Berlin, surveillance records on Eter and Chreidi and reports on the Libyan embassy's activities compiled by Chanaa. There were also receipts for money allegedly paid to the Chanaas for the attack on La Belle, secretly photocopied by the Stasi. But the prosecution was unable to prove that Colonel Gaddafi was behind the attack - a failure which the court blamed on the "limited willingness" of the German and US governments to share intelligence.[4]

According to the German TV programme Frontal, broadcast on 25 August 1998, Eter had been working for the CIA for years:

On 9 September 1996, Berlin public prosecutor Detlev Mehlis, police inspector Uwe Wilhelms and a Mr Winterstein of the German Federal Intelligence Service (BND) met Musbah Eter on the Mediterranean island state of Malta. The meeting had been prepared by the BND, which maintained close connections to its American counterpart, the CIA. Musbah Eter was running an international business in Malta, which, according to Frontal, served as a cover for extensive intelligence operations on behalf of the CIA.

The German authorities wanted him on a murder charge. But during the Malta meeting a deal was struck:

"Immunity for Eter, if he incriminates Chraidi for La Belle."

The next day Eter went to the German embassy and testified. As a result, the warrant against him was scrapped and he was allowed to travel to Germany.

In the words of Frontal, Eter is "the key figure in the La Belle trial." At the time of the disco bomb attack he worked for the Libyan embassy in East Berlin. But he paid regular visits to the US embassy. According to Christian Ströbele, the lawyer for Chraidi, this highly unusual fact is proven by extensive notes of the East German secret police, who watched Eter very closely at the time. There are many indications that Eter was actively involved in the La Belle bombing. According to interrogation transcripts studied by Frontal, he had the detailed knowledge of a participant. He even admitted that he brought the operating instructions for the bomb to the flat of a co-defendant.

Frontal asserts that besides the defendants in the present trial, another group was involved in the La Belle bombing - a group of professional terrorists, working for anybody who paid them, led by a certain "Mahmoud" Abu Jaber. Members of this group, according to Frontal, "have barely been bothered by the prosecution and live securely in other countries."

In the months preceding the La Belle attack they lived in East Berlin and met, almost on a daily basis, with the present defendants. Hours before the attack they moved to West Berlin, where the bomb exploded. Their movements were monitored by the East German and Russian secret services, who concluded that they were working for Western intelligence. The Russian KGB, in a document cited by Frontal, gave the opinion that American counterintelligence planned to use "Mahmoud" to concoct a case for the involvement of Libyan terrorists in the attack. According to the same KGB document, "Mahmoud" had warned West Berlin intelligence two days before the explosion.

Frontal followed the traces of Mohammed Amairi, the right-hand man of "Mahmoud" Abu Jaber, who, according to the documents it has studied, "was particularly involved in the preparation of the La Belle attack." Amairi left Germany for Norway in 1990, when a warrant was issued for his arrest. He now lives in the Norwegian town of Bergen, where Frontal found and interviewed him. He stopped the interview when he was asked what secret service he had been working for. His lawyer, Odd Drevland, finally told the story. When Amairi moved to Norway he was arrested and branded "a danger to the country" on the front page of tabloids. But then the Israeli secret service Mossad took charge of him and "everything changed." "Was Amairi a Mossad agent?" asked Frontal. "He was a Mossad man," answered Drevland. In the meantime, Norway has granted asylum to Amairi and he will soon receive Norwegian citizenship. The Berlin prosecutor has lifted the warrant against him.

"These secret service intrigues present a task for the Berlin court that is almost insoluble," concludes the Frontal report. "But one thing is certain, the American legend of Libyan state "terrorism" can no longer be maintained."[5] 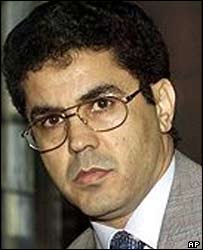