Missouri State University (MSU or MO State), formerly Southwest Missouri State University, is a public university in Springfield, Missouri. Founded in 1905 as the Fourth District Normal School, it is the state's second largest university campus by enrollment, with an official enrollment of 23,450 in the fall semester of 2019. The schools also operates a campus in West Plains, Missouri offering associate degrees. A bachelor's degree in business is offered at Liaoning Normal University in China. The university also operates a fruit research station in Mountain Grove, Missouri and a Department of Defense and Strategic Studies program in Fairfax, Virginia.[1]

Missouri State University was formed as the Fourth District Normal School, by legislative action on March 17, 1905. Like other normal schools of the day, the school's primary purpose was the preparation of teachers for the public school system. 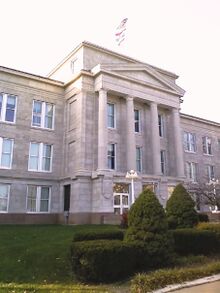 Classes began on June 11, 1906, with the first class totaling 543 students in an off-campus facility. The first permanent campus building was Academic Hall. Its cornerstone was laid on August 10, 1907, and construction was completed in January 1909. The building is now known as Carrington Hall, named after William T. Carrington, the first president of the State Normal School. It serves as the University's administrative center.[2]

By 1985, SMSU had grown into the second-largest public university in the state, leading administrators to support a bill to change the name to Missouri State University, which eventually died in committee in the Missouri General Assembly. In 1990, enrollment surpassed 20,000 students for the first time, but further attempts to rename the school throughout the 1990s and early 2000s also failed. However, the state legislature did grant the university a statewide mission in Public Affairs in 1995.

In June 2000, Missouri State University entered into an agreement with Liaoning Normal University of the People's Republic of China to establish the LNU-MSU College of International Business on the campus of LNU. As an educational cooperation project between the two universities, the Branch Campus received formal approval from the governing bodies of both universities, the Missouri State Board of Governors and the Bureau of Education of Liaoning Province, China.[4] The college currently offers an Associate of Arts, in General Studies degree and a Bachelor of Science, in General Business degree. The Branch Campus programs are fully accredited by the Higher Learning Commission of the North Central Association of Colleges and Schools as well as the Associate to Advance Collegiate Business Schools (AACSB International). Dalian has a diverse student body, with students from all over the world including Korea, Indonesia,Senegal,Nigeria, Zambia,Iran,Japan and the U.S. It is located atop a prominence on the North Campus of LNU overlooking the university to its south.

The Darr Agricultural Center is located on 90 acres (36.4 ha) near the intersection of Kansas Expressway and Sunshine Street in southwest Springfield. The Darr Center serves as a laboratory and field experience classroom for the study of livestock management, equine studies, horticulture, agronomy, animal science, and wildlife conservation and management. Improvements in 2007 included extensive renovation of the main arena, as well as the addition of a stalling barn, a multi-use barn, office space, bovine and equine handling facilities, a research laboratory, a classroom, and a two-bedroom apartment for graduate student housing.[5] In 2010 MSU announced a $6.5 Million expansion of the facility to include construction of a new Learning Center with a large classroom and lecture hall equipped with an animal entrance and specialized pen; classrooms with distance learning technology; and laboratories to facilitate research in the areas of water quality, soil chemistry, horticultural sciences, animal physiology and more. The building will also include a conference space and a 400-person capacity banquet hall available for public and private events. The new facility is to be LEED Silver certified, incorporating sustainability features such as site filtering of storm water runoff, occupancy sensors that control lighting and temperature, use of natural light, and ground source heat-pump systems.[6]