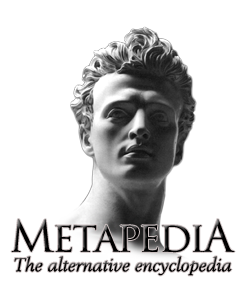 Metapedia is an electronic encyclopedia which contains far-right, identitarian, white nationalist, white supremacist, white separatist, antisemitic, Holocaust denial, and neo-Nazi[1] points of view.[2][3][4] The site describes itself as focusing on European culture, art, science, philosophy, and politics. It was officially launched on 26 October 2006 with the Swedish-language edition.[5][6] The English edition was launched on 28 April 2007.[7] The Hungarian edition has the most articles: 144,189 as of 27 September 2013.[8]