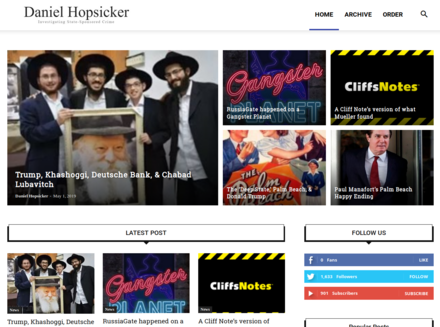 The Mad Cow Morning News or Mad Cow News is where Daniel Hopsicker publishes his research. It has been using Wordpress for many years.

The site domain name was registered in 1996, and the site archives go back to March 2001, though that refers to the events of 9-11 and so must be incorrectly dated.[1] The site slogan was changed (in 2018?[citation needed]) from "Investigative Reporting into Drug Trafficking, 9/11 & Terrorism" to "Investigating State-Sponsored Crime". "

The site has a number of important stories researched by Daniel Hopsicker, particularly about the CIA's drug business, such as Cocaine 1 and Cocaine 2. Reporting in 2018 centered on Oleg Deripaska and Russiagate.

A page on 21 January 2019 about Nastya Rybka was entitled America's Long Slow Fade to Black.[3]