The Maccabi World Union was created at the 12th World Jewish Congress in Karlovy Vary, Czechoslovakia in 1921. It was decided by the secretariat of Jewish sport leaders to form one umbrella organization for all Jewish sports associations. Its aims were defined as working "foster physical education, belief in Jewish heritage and the Jewish nation, and to work actively for the rebuilding of our own country and for the preservation of our people". [1] In 1960, the International Olympic Committee officially recognized the Maccabi World Union as an "Organization of Olympic Standing".[2]

The Maccabiah Games are held every 4 years. The first were in the purpose-built Maccabiah Stadium in Tel Aviv in 1932. [3]

The irony of the 2015 European Games

80 years after Hitler's 1936 'Gentiles-only' Olympics, Berlin's Park Stadium is scheduled to host the 2015 (Jews-only) European Maccabiah Games from 27 July to 5 August. [4] Quite apart from the historical irony, in a country where Jews comprise just 0.2% of the population - making 99.8% of the native population ineligible to take part - this must count as a noteworthy event.

Opening of the 2015 Games in Berlin 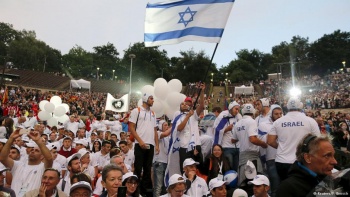 The Israeli delegation to the games is the largest, followed by the team from the UK.

German President Joachim Gauck made the opening speech. He stressed the symbolism of holding a Jewish sporting event at a site built under the Nazis, and in a year when Germany and Israel were celebrating 50 years of diplomatic relations.

"I'm glad and I think it is significant that you chose this place, and I am very moved that this country and this city will now see the Jewish games. I think it's great that the Jewish community in Germany is growing and Jewish life has become so vibrant here again," [5]

Striking the fawning, subservient note so typical of aspiring German policians in matters Jewish, and demonstrating that the offensive concept of Collective guilt - The Tätervolk, or 'Race of Perpetrators', as Jewish Orthodoxy still brands all Germans - is alive and well, Germany's justice minister. Heiko Maas said:

"It's not something we could possibly have ever hoped for after World War Two and the Holocaust. I see this as a stroke of good fortune and gift for our country that we didn't deserve." [5]

Following is a news item from the algemeiner, a large circulation Jewish website based in the USA: 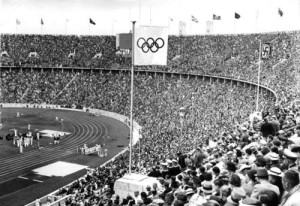 The 14th European Maccabi Games are taking place place in the Olympiastadion (pictured), the same Olympic stadium built and used for the Summer Olympics of 1936 during the Nazi era. Credit: German National Archives via Wikimedia Commons.

Jewish athletes have gathered at the 14th European Maccabi Games, whose opening ceremony was held Monday.

The July 27-Aug. 5 games are taking place at Berlin’s Olympiastadion, the same stadium built and used for the Summer Olympics of 1936 during the Nazi era. At that time, Jews were discouraged from participating.

The organizers of the games being called “Europe’s biggest Jewish sports event” say this year’s games “send a message for tolerance and openness against anti-Semitism and racism.”

“Today Jewish life in Germany is reviving. We have over 120,000 members in 108 Jewish communities. Berlin is the biggest Jewish community and you will have all the options to explore it this week. You will see throughout the next ten days that Jews in Germany are not only safe but also proud of our long-standing Jewish traditions,” said the host nation’s Alon Meyer, president of Maccabi Germany, at the welcome event for the games.

“I think it’s a great feeling to have a bunch of Jews together from all around the world, the biggest amount of Jews in Germany since the Holocaust. I think it is a great thing. It’s such an awesome feeling to be here,” said Arielle Schneider of the U.S. women’s soccer team.

Participants in the games come from 36 countries and will compete in 19 sports disciplines. [6]

The following appeared prominently on the Jerusalem Post on the 4th day of the Games:

Two youths taunted six Jewish men with anti-Semitic insults and tossed an object at the group, police in the German capital said on Friday. The attackers fled and are being sought for alleged attempted assault and hate crimes. The incident took place in the Berlin district of Neukölln, a neighborhood with a large Muslim population. Separately, police arrested “a man with an Arab background” for yelling anti-Semitic insults at two security guards at the Hotel Estrel, where 2,000 people and athletes associated with the European Maccabi Games are staying, the Die Welt paper reported on Saturday. The hotel is 900 meters from the Al-Nur Mosque, a hotbed of radical Islam. [7]

Germany, Muslims, Arabs and Antisemitism, a potent mix indeed, and in a single paragraph with the Maccabiah machine to promote it in accordance with the following from one Alex Feuerherdt, tagged as "a leading expert on anti-Semitism in Germany’s sporting culture": [7]

“Jews established the event [Maccabi] because of anti-Semitism and Burmester [a German journalist] wants Jews to integrate and not have their own sports event. She obviously has a problem with Jewish self-confidence and sovereignty and her comments reflect double standards.”