Lyceum of the Philippines University 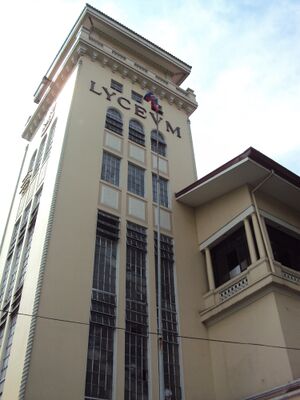 The Lyceum Tower in Intramuros 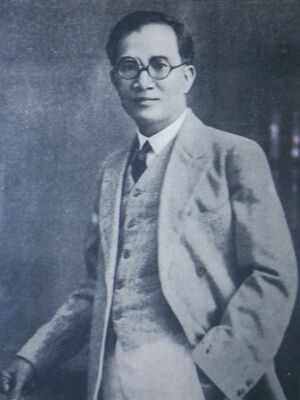 José P. Laurel - Founder of Lyceum of the Philippines University

The Lyceum of the Philippines University (Pamantasang Liseo ng Pilipinas), also referred to by its acronym LPU is a private non-sectarian institute of higher education located in Intramuros in the City of Manila, Philippines. It was founded in 1952 by Dr. José P. Laurel, who became the third president of the Republic of the Philippines.

Two of LPU's most prominent features are its entrance gate through the "Hall of Heroes", commonly known as "Mabini Hall", which exhibits busts of revered Philippine historical figures sculpted by the National Artist Guillermo Tolentino and the famous "Lyceum Tower" which serves as the school's landmark and stands witness to the university's history and continuing progress.

The LPU has affiliate/branch campuses in Makati, Batangas, Laguna, Cavite and Davao.

Lyceum of the Philippines University was founded in 1952 by Dr. José P. Laurel, who became the third president of the Philippines, making LPU the only school founded by a Philippine president.[1] He named the institution after lykeion, the grove in ancient Athens where Aristotle taught his pupils. Its educational vision is founded on principles that its founder, José P. Laurel, set down.[citation needed] It opened its gates to its first students on July 7, 1952.

The LPU Manila was built on the site where the old San Juan de Dios Hospital was located.

The university offers undergraduate and graduate programs in various fields including law, the liberal arts, diplomacy, international trade and journalism, as well as nursing, engineering, business and accountancy, mass communications, tourism, and hotel and restaurant management.

It is rated one of the Philippine's Top 20 Universities by Commission on Higher Education (CHED) and the only university in the Philippines who passed the accreditation of The Tourism and Hospitality Management Education, Center of Excellence or THE-ICE.[citation needed]

It is a member of the Intramuros Consortium which includes the technical school Mapúa University, the Catholic school Colegio de San Juan de Letran, and the city-owned Pamantasan ng Lungsod ng Maynila (University of the City of Manila).

In 2012, Lyceum marked its 60th foundation anniversary. The Philippine Postal Corporation, together with the LPU administration released a commemorative stamp.[6]