Kenneth Johannemann was a janitor at the World Trade Centre. On September 11th, 2001 he reported seeing explosions in the basement of the World Trade center. In spite of prodding from reporters about "the planes" he clearly testified to a massive explosion in the basement of one of the Twin Towers. He also rescued someone who received full body burns from an explosion that took place at the base - not the top - of the building.[1]

He was at work at the World Trade Centre on the morning of September 11th, 2001. He was in the North Tower waiting for an elevator when the first explosion occurred. The blast created a fireball that engulfed the elevator shaft. Johannemann responded by saving the life of a man that was badly burned in the event.[2]

Johannemann spoke regularly about what he saw and heard that day.[2] His family reportedly said that 9/11 changed him - after the events he became withdrawn and began drinking heavily, falling in and out of work.[3] 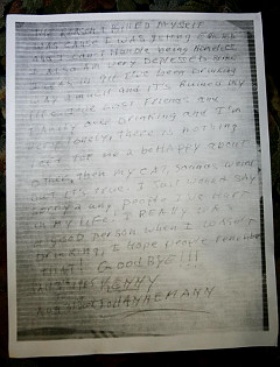 The "suicide note" as published

On 8 September 2008, he was found dead, from a gunshot to the head.[4] A low resolution, apparently deliberately obfuscated, image of a supposed "suicide note" was published after his death. The note concluded:

The reason I killed myself was 'cause I was getting evicted and can't handle homelessness. I was also very depressed since 9/11. I've been drinking way too much and it's ruined my life. I've lost friends and family over drinking and I'm very lonely. There is nothing left for me to be happy about other than my cat. Sounds weird, but it's true. I just wanted to say I'm sorry 2 any people I ever hurt in my life. I really was a good person when I wasn't drinking. I hope people remember that.

(Emphasis added to highlight an unexpected turn of phrase.)

The reference to homelessness is unexpected since Johannemann's cousin, Gerald Maya had offered him a place to live, an offer he is reported[Where?] to have turned down.