Johnny Chung was involved in the financing of Bill Clinton's election bid. In 2017, the Daily Mail claimed that the fate of other Clinton associates, such as Ron Brown lead Chung to fear for his life. Concerned that he might be a target for assassination, he made a videotape, which the Mail claimed to have.[1] He is believed to be living in China. 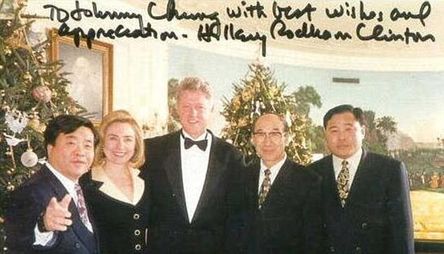 Chung later testified under oath to the U.S. House Committee in May 1999 that he was introduced to Chinese Gen. Ji Shengde, then head of Chinese military intelligence, by Liu Chaoying. Chung said that Ji told him: "We like your president very much. We would like to see him reelect [sic]. I will give you 300,000 U.S. dollars. You can give it to the president and the Democrat [sic] Party."[2] Both Liu and the Chinese government denied the claims.[3]

Chung was eventually convicted of bank fraud, tax evasion, and two misdemeanor counts of conspiring to violate election law.[4] On December 14, 1998, Johnny Chung was sentenced to probation and 3,000 hours.