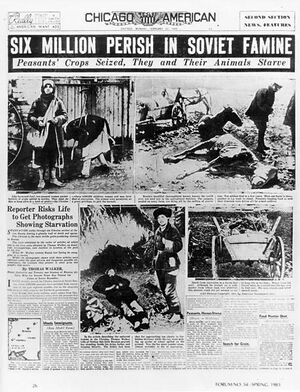 Front page of the Chicago American 1935. The casuality inflation had already set in. 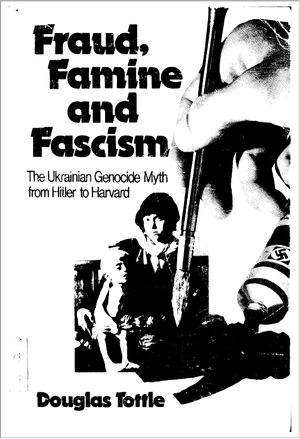 The cover of Douglas Tottle's 1987 book

The Holodomor is a politicized term for a famine in Soviet Ukraine from 1932 to 1933. Historians are still debating the causes, extent and results of it, in what has become a highly politicized process.

A famine in the Soviet Ukraine from 1932 to 1933 killed six to ten million Ukrainians in a deliberate genocide against the Ukrainian people.

The word Holodomor literally translated from Ukrainian means "death by hunger", "killing by hunger, killing by starvation",[1] or sometimes "murder by hunger or starvation".[2] It is a compound of the Ukrainian words holod =hunger; and mor = plague (disease).

The word was deliberately created after the Second World War[When?] to hitchhike on its more famous German cousin. The famine became a rallying point for Ukrainian nationalism, both during the Cold War and especially after the coup and tensions with Russia after 2014.

The roots of the famine-genocide campaign lay in a series of articles written by "noted journalist, traveller and student of Russian affairs" Thomas Walker for the Hearst press in 1935. The articles described the horrific famine of 1932-33 in Ukraine, while photographs, accompanying the stories, portrayed desperate victims of the famine.

The material and the photographs were truly impressive, but, as it turned out later "noted" journalist Thomas Walker had never visited Ukraine in 1932-1933, furthermore, he never existed.[3] As for the photographs, US investigative journalists revealed in 1935 that some of them were taken in war-torn areas of Europe just after the First World War, others depicted the Volga famine victims of 1921-1922 in Russia.

The Russian Empire had suffered from periodic devastating famines since the end of 19th century, long before Bolsheviks came to power in 1917. Then there was a series of famines in 1920-21, 1924, 1927 and 1928. The 1933 famine, the last in the Soviet Union, happened not just in the Ukraine, but also in the Lower Volga and the North Caucasus. According to some estimates, during the famine of 1932-1933 about three million people died (both from famine and epidemics) in the USSR, while one third of them died in Ukraine.

Because of Cold War needs, the number of "Holodomor"-victims grew by leaps and bounds and reached almost ten million people.