Free energy, or over-unity (OU) is getting created in a process in which output energy exceeds input power required to produce it. This is different from "perpetual motion" machines in that (according to proponents) the extra energy is extracted from some infinite, invisible reservoir, such as the "zero-point energy field". This theory is opposed by mainstream science;[1] it stands to reason that if practical applications and machines could be built, they would endanger multi billion dollar industries (fossil fuel, atomic energy) and with some approaches people would no longer be dependent on utilities.

Friedrich Lüling was interviewed by the German news reel show: "UFA-Wochenschau" in 1966,[2] where he said that his magnetic motor was expected to be installed in a car that year and one set of magnets would last up to 20 years. His main method was to momentarily "neutralize" the magnet to get past the locking point.

Transcript of the relevant part:

Speaker: Magnet Motor in a car? Innovators were always familiar with the handling of magnetism; the phenomenal feature of some material to attract iron. But who, until now, was of the opinion that all thinkable applications of this natural phenomenon have been patented, have been wrong.

The 52-year-old machine builder Friedrich Lüling from Schleswig-Holstein, in 1954, already created the basis for the Permanent Magnet Motor. Meanwhile he is of the opinion to have completed his innovation far enough that he thinks it is the right time to present the new motor in the UFA-Wochenschau for the first time.

Lüling: Me contrary to all traditional knowledge of the permanent magnets 1954 succeeded, to neutralize permanent magnets. The rotating armature is attracted by the magnet system shortly before the point where he wants to hold him. Neutralising the magnet is at the same moment, so turns out the anchor without any withdrawal force, without any residual magnetism.

The value of this invention shows also probably to let in the years of effort of others who freeze thing, or to sabotage them. This neutralizing takes place when the current experimental engine at 290 RPM 580 times per minute. A magnetic motor can run 10 to 20 years with a set of magnets without interruption. The possibility of the use of a magnetic motor is in all areas, not least, as a car drive without annoying engine noise and harmful exhaust gases and still in this year this experimental machine to drive a car.

A perpetual motion machine is able to extract exactly the same amount of energy as is used to power it. 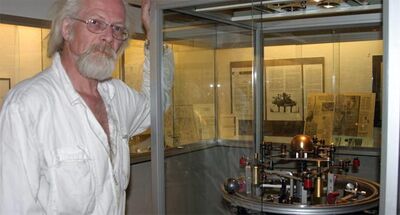 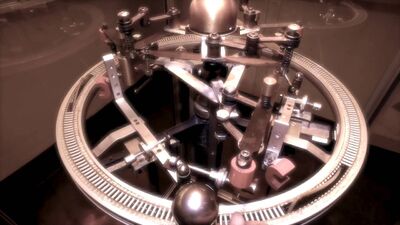 Reidar Finsrud invented a (close to) perpetual motion machine.[3][4] The machine reportedly uses a combination of gravity, magnets, pendulums, and a little push to get it started in order to generate continuous motion.[5][6]