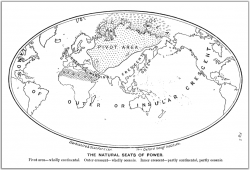 
Wikispooks Comment A seminal work which greatly illuminates understanding of 20th century geo-politics. The concepts and categories it defines were at the heart of British Empire motives through two worlds wars and have continued in the same vein post World War II under de-facto US leadership.

★ Start a Discussion about this document
The Geographical Pivot of History

The paper runs to 18 pages in total including 3 pages of maps.

The following are the concluding 3 pages only

.... As we consider this rapid review of the broader currents of history, does not a certain persistence of geographical relationship become evident? Is not the pivot region of the world’s politics that vast area of Euro-Asia which is inaccessible to ships, but in antiquity lay open to the horse-riding nomads, and is to-day about to be covered with a network of railways? There have been and are here the conditions of a mobility of military and economic power of a far-reaching and yet limited character. Russia replaces the Mongol Empire. Her pressure on Finland, on Scandinavia, on Poland, on Turkey, on Persia, on India, and on China, replaces the centrifugal raids of the steppemen. In the world at large she occupies the central strategical position held by Germany in Europe. She can strike on all sides and be struck from all sides, save the north. The full development of her modern railway mobility is merely a matter of time. Nor is it likely that any possible social revolution will alter her essential relations to the great geo- graphical limits of her existence. Wisely recognizing the fundamental limits of her power, her rulers have parted with Alaska; for it is as much a law of policy for Russia to own nothing over seas as for Britain to be supreme on the ocean.

Outside the pivot area, in a great inner crescent, are Germany, Austria, Turkey, India, and China, and in an outer crescent, Britain, South Africa, Australia, the United States, Canada, and Japan. In the present condition of the balance of power, the pivot state, Russia, is not equivalent to the peripheral states, and there is room for an equi~ poise in France. The United States has recently become an eastern power, affecting the European balance not directly, but through Russia, and she will construct the Panama canal to make her Mississippi and Atlantic resources available in the Pacific. From this point of view the real divide between cast and west is to be found in the Atlantic ocean.

The oversetting of the balance of power in favour of the pivot state, resulting in its expansion over the marginal lands of Euro-Asia, would permit of the use of vast continental resources for fleet-building, and the empire of the world would then be in sight. This might happen if Germany were to ally herself with Russia. The threat of such an event should, therefore, throw France into alliance with the over-sea powers, and France, Italy, Egypt, India, and Corea would become so many bridge heads where the outside navies would support armies to compel the pivot allies to deploy land forces and prevent them from concentrating their whole strength on fleets. On a smaller scale that was what Wellington accomplished from his sea-base at Torres Vedras in the Peninsular War. May not this in the end prove to he the strategical function of India in the British Imperial system? Is not‘ this the idea underlying Mr. Amery’s conception that the British military front stretches from the Capo through India to Japan?

The development of the vast potentialities of South America might have a decisive influence upon the system. They might strengthen the United States, or, on the other hand, if Germany were to challenge the Monroe doctrine successfully, they might detach Berlin from what I may perhaps describe as a pivot policy. The particular combinations of power brought into balance are not material; my contention is that from a geographical point of view they are likely to rotate round the pivot state, which is always likely to be great, but with limited mobility as compared with the surrounding marginal and insular powers.

I have spoken as a geographer. The actual balance of political power at any given time is, of course, the product, on the one hand, of geographical conditions, both economic and strategic, and, on the other hand, of the relative number, virility, equipment, and organization of the competing peoples. In proportion as these quantities are accurately estimated are We likely to adjust differences without the crude resort to arms. And the geographical quantities in the calculation are more measurable and more nearly constant than the human. Hence we should expect to find our formula apply equally to past history and to present politics. The social movements of all times have played around essentially the same physical features, for I doubt whether the progressive desiccation of Asia and Africa, even if proved, has in historical times vitally altered the human environment. The westward march of empire appears to me to have been a short rotation of marginal power round the south-western and western edge of the pivotal area. The Nearer, Middle, and Far Eastern questions relate to the unstable equilibrium of inner and outer powers in those parts of the marginal crescent where local power is, at present, more or less negligible.

In conclusion, it may he well expressly to point out that the sub- situation of some new control of the inland area for that of Russia would not tend to reduce the geographical significance of the pivot position. Were the Chinese, for instance, organized by the Japanese, to overthrow the Russian Empire and conquer its territory, they might constitute the yellow peril to the world’s freedom just because they would add an oceanic frontage to the resources of the great continent, an advantage as yet denied to the Russian tenant of the pivot region.