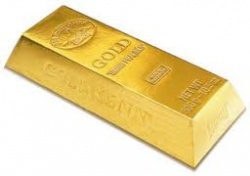 The specific gravity of tungsten is only about 0.26% less than that of gold, so detecting such counterfeiting by weighing only is problematical.

Back in October, 2009 I penned an article titled, Central Banking: A Blight On Humanity, where I reported that, in an Asian depository there had been found 60 metric tonnes of “Good Delivery” gold bricks that had been gutted and filled with tungsten. That article was followed up with, On Doing God’s Work (archived), where additional information on the fake gold bricks was presented. This lengthy report has been written to provide the background and genesis of who was involved, why the fake gold was produced and how it was fed into the international gold market.

★ Start a Discussion about this document
The Genesis of the Gold-Tungsten: The Rest of the Story