Euston Square Gardens is a public garden on Euston Road in the London Borough of Camden.

The gardens are the northern gardens of the former residential Euston Square, the southern gardens were renamed Endsleigh Gardens.

Euston Square Gardens are enclosed by railings and covered with grass and London plane trees. The two lodges at the gardens date from 1870 and were once the entrance to Euston station. They are inscribed with the names of the London and North Western Railway.

A worksite for High Speed 2 and the proposed Euston St Pancras railway station is situated at the gardens. This is to construct an underground pedestrian link between Euston railway station and Euston Square tube station.

The plane trees of Euston Square Gardens are emblematic of all the trees that will be destroyed in the building of HS2.

According to the Woodland Trust, between London and Birmingham, “32 ancient woods will be directly affected. A further 29 will suffer secondary effects such as disturbance, noise and pollution.”

This sacrifice demanded of the trees is in order to slightly shorten the train journey between those two cities for those who can afford to pay the fare.[1] 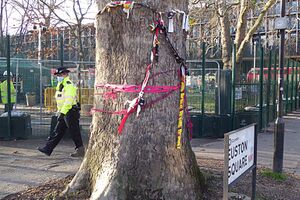 Plane tree wrapped in scarfs and ribbons: emblematic of all the trees that will be destroyed

An HS2 Rebellion protest camp was set up in September 2020 – on land compulsorily acquired for HS2's Euston station upgrade – to protect 20 healthy, very old and very large trees in Euston Square Gardens that HS2 Ltd deemed necessary to cut down for a temporary taxi rank.

In March, a freedom of information request revealed that the Metropolitan Police had spent £140,000 on policing the tunnels during the removal of the protesters.[2] 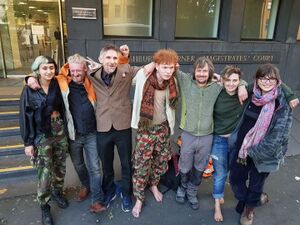 On 6 October 2021, seven people who lived in a 100 ft network of tunnels under Euston Square Gardens for 31 days to stop HS2 had all charges dismissed in a real-life courtroom drama hailed as a “victory for the right to protest” by supporters including TV presenter Chris Packham.

The victorious defendants were part of a group of nine people, aged 16-48, who occupied the tunnels between 27th January and 27th February 2021. They dug the tunnel to protect Euston Square Gardens, one of London’s most visited green spaces, from destruction by HS2 who wanted to build a temporary taxi rank and then, allegedly, high rise offices.

In scenes reminiscent of TV’s "Rumpole", the trial, scheduled to last all week, was cut short as the prosecution case collapsed. District Judge Susan Williams dismissed 7 charges of Aggravated Trespass and one of Criminal Damage declaring there was “no case to answer.”

Referring to the moment, at 4.15am, when 100s of bailiffs stormed the park and "Buckingham Pallets community centre" built by volunteers working in the park, Judge Williams said:

“There is no evidence of any constructor or construction taking place on the land at that time.”

The judge added that public money should not have been used to bring this case to court.

The victorious tunnellers include Blue Sandford (18), who wrote her first book "Challenge Everything" when she was just 17, scientist Dr Larch Maxey (49) and Daniel Hooper (48), also known as "Swampy", Britain’s most celebrated protestor.[3]

Dr Larch Maxey, who lived in the tunnel for 27 days, said:

“Our victory in court is a victory for the right to protest. But what really matters is victory in the fight for our collective survival.”
“The science is terrifying, As Professor Sir David King and Chatham House report, we have 3-4 years to slash emissions or we’ll lock-in climate breakdown, with multiple breadbasket failures and societal collapse by 2040. If we fail to act immediately very few Brits will live out our natural lives, instead we’ll die amid unimaginable horror and suffering.”[4]

Independent commentators and the defendants agree this was a political trial, with Dan Hooper suggesting:

Simon Natas, of ITN Solicitors, who represented the protesters, welcomed the judge’s decision:

“The protesters always maintained they never committed the offence of aggravated trespass. They have now been vindicated. We are extremely pleased.”

“In court we heard talk of tunnel collapse but until its cancelled HS2 will accelerate societal collapse.
"It will emit 14 Million Tons of CO2, according to DoT figures, from concrete alone. They refuse to even tell us the carbon emissions that HS2’s soil disturbance will cause!
“HS2 will never be Carbon Neutral and DoT figures show just 1% of passengers would have flown, and just 4% would have driven, so HS2’s talk of a “modal shift” from other forms of transport is utter greenwash!”

HS2 has also been rocked by a series of recent allegations of deception and corruption, including hiding from Parliament the knowledge that the project is once again well over budget and a decade behind schedule.[5]

An HS2 spokesperson said they were “bitterly disappointed” with the outcome of the case.[6]

This page imported content from Wikipedia on 18 November 2021.
Wikipedia is not affiliated with Wikispooks.   Original page source here
Retrieved from "https://wikispooks.com/w/index.php?title=Euston_Square_Gardens&oldid=230097"
Categories: