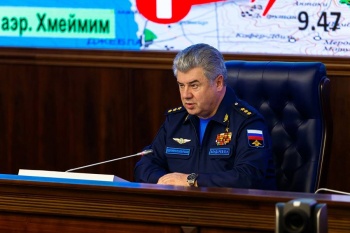 Translated from Russian
Image right: General Bondarev briefing on the Turkish shoot-down of a Russian Su24 aurcraft over Syria. 27 November 2015


Wikispooks has made minor grammatical corrections/improvements and added headings to aid readability. Otherwish the document is an exact copy of is source.

Wikispooks Comment Unless the technical information provided in this report can be refuted, it proves beyond reasonable doubt that a well-laid ambush was prepared by the Turkish authorities and that the information on which it was based came from that provided to the US military by the Russian Air Force under their 23 October 2015 Memorandum of Understanding aimed at coordinating anti-ISIS measures and avoiding accidental encounters between coalition member militaries. Based on a long history of plausibly-deniable deceit, it would be 'par-for-the-course' for the US military to have deliberately relayed that information to Turkey with a nod-and-wink as to how it might be used. It represents yet another hard lesson that will not be lost on Russia. 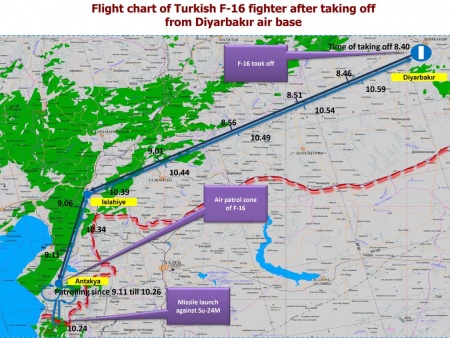 In the course of appearance of different versions concerning circumstances of the attack on the Russian Su-24M aircraft carried out by the Turkish F-16 fighter in the sky over Syria on 24 November 2015, the Russian Defence Ministry presents facts of this situation, unprecedented in its disloyalty.

The incident occured on 24 November. Combat loss of the Su-24M, tail number 83, was caused by fire engagement.

At 9:15 Moscow Standard Time (MSK) it was assigned to carry out strike near Kepir-Motlu-Zahiya located in the north of Syria. This task was assigned to two Su-24M aircraft crews, including one of pilot Lieutenant Colonel Oleg Peshkov and Captain Konstantin Murakhtin (aircraft number 83, with combat payload of four OFAB-250-270 air bombs). The crews were assigned to conduct combat air patrol near Maarrat al-Numan at flight levels of 5800 m and 5650 m respectively. The aircraft took off from the Hmeymim airbase at 9:42.

At 9:52, the Su-24M entered the detection zone of Turkish Air Force radar capabilities and was under their coverage in the course of 34 minutes. After 20 minutes had passed since the crew had entered its area of responsibility, the Command centre of the Hmeymim airbase ordered it to eliminate militants in the area. The crews bombed two assigned targets and turned to the left to make another approach for destruction of two remaining targets.

As it was carrying out an airstrike at a target located 5.5 km to the south of the Turkish border, at 10:24, the crew led by Lieutenant Colonel Peshkov O.A. launched bombs at the target and was then downed by an "air-to-air" missile from an F-16 fighter of the Turkish Air Force, which had performed take-off from the Diyarbakir airfield of the 8th Air Brigade located in the territory Turkey. 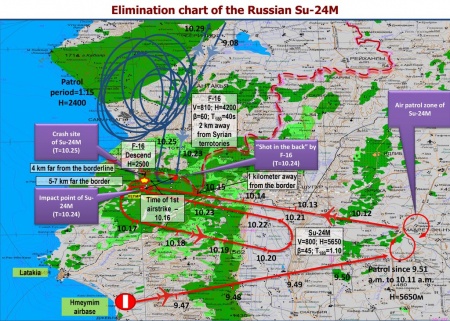 During analysis of the video air situation display provided by the Command Centre of the Syrian Air Force and Air Defence, an aerial target was spotted, moving from Turkey in the direction of the state border at a speed of 810 kmph and with a heading of 190 degrees. After the Turkish fighter approached the Su-24M at a range equal to the range of a missile launch (ie 5-7 km, proving that the F-16 was in Syrian air space), it quickly maneuvered to the right, lowered, and disappeared from the air situation display.

According to objective monitoring data received from the air defence means, the Turkish jet remained in Syrian air space for 40 seconds and dived 2 km into Syrian territory, while the Russian bomber did not cross the Turkish border. The crew of the leading aircraft confirmed the missile launch. After the launch and a left turn for heading 130 degrees, they observed a flash and a tail of white smoke, which they reported to the flight control officer.

At 10:25, the flight control officer registered that the mark from the Su-24M aircraft disappeared from radars. Further requests and requests from the leader crew of Lieutenant Colonel Peshkov remained unanswered.

Estimated time of arrival of an F-16 aircraft, from the military airfield Dyabakyr and a stand-by position on the ground to the possible place of missile launch, constitutes 46 minutes (15 minutes for preparation and take-off, 31 minutes) - flight time needed to arrive at the firing point).

Thus, interception of a Su-24M aircraft from the stand-by position on the ground from the military airfield Dyabakyr is impossible as the necessary time for approaching the target exceeds the minimum time needed for attack by 12 minutes. Objective monitoring data received from the Syrian radar stations confirmed the presence of two F-16’s in the duty zone from 9:11 till 10:26 min (ie 1 hour 15 mins) at an altitude of 2400 metres. This shows that the operation was planned beforehand and the fighters were ready to attack from an air ambush over the territory of Syria.

It must be mentioned that the F16's stopped maneuvering in the duty zone and headed rapidly to the offset point, 1 minute and 40 seconds before the maximum approach of the Su-24M aircraft to the Syrian-Turkish border. The method the F-16 aircraft entered the engagement zone (not by a curve of pursuit) shows that it was vectored from the ground.

Turkish pre-planning and attack vectoring from the ground

Actions of the Turkish aircraft after launch of its missiles over the territory of Syria ­- the wind-down turn with loss of altitude and going under the lower range line of the air defence radar - also demostrates that its perfidious crew's actions were planned beforehand.

Objective monitoring data, from the Hmeymim airbase and the leader aircraft, did not register any request made by the crew of the Turkish aircraft to the Russian pilots on the pre-arranged frequency.

The readiness of the Turkish media to cover this incident is also surprising. The strike with the "air-to-air" missile was made by a pilot of the F-16 aircraft of the Turkish Air Force at 10:24 and in just an hour and a half, the video showing the falling warplane was published on the YouTube video hosting site by a Turkish private television company. The angle of the footage indicates the approximate place of recording. It is situated in an area controlled by radical terrorist groupings consisting of people from the North Caucasus and the former republics of the USSR. The operator must have known the best time and place for optimum recording of the exclusive footage, in advance.

Rapid appearance of militant groups in the landing area and publication of the video in the Internet just 1.5 hours after the accident show that the terrorists had also been informed in advance about this prepared provocation for its videoing and publication internet social media.

All these facts clearly show advnced preparation for coverage of the downing of the aircraft, using the Turkish Air Force, illegal armed groups and Turkish information agencies along with active support from the media.

Since the signing of the mutual understanding memorandum between the Russian Ministry of Defence and the US Department of Defence on 23 October 2015, the Command of the Russian air group has undeviatingly taken all measures to prevent incidents between Russian military aircraft and warplanes belonging to the Coalition countries.

In accordance with these agreements, the Russian Air Force Command Centre at the Hmeymim airbase had informed representatives of the US Air Force concerning the engagement areas and echelons of the two Russian Su-24M bombers in advance. That is why statements made by different officials from Turkey claiming that they had not identified the aircraft as Russian are, at least, confusing. Moreover, the Turkish military command has violated all articles and dispositions of International Law that regulates defence of state borders in their air space.

It is to be stressed that there were neither apologies, nor offers of help in positioning and evacuation of the downed crew from the Turkish Authorities after the tragedy happened.

It is also necessary to touch upon the subject of the search-and-rescue operation conducted to evacuate the navigator, Captain Konstantin Murakhtin from the landing location.

First of all, the Command expresses its gratitude to all the members of the operation for their accurate, coordinated work, their tenacity and composure shown in a most difficult situation at night and surrounded by terrorists. Their work helped to bring the ejected navigator back to base. As soon as Captain Murakhtin was safe, massive airstrikes were made by Russian aircraft and the Syrian rocket artillery on the area occupied by the terrorists who had been actively searching for him.

In conclusion, it must be said that the Aerospace Forces Command is proud of its pilots, technicians, commanders, and maintenance personnel, which carry out combat missions to fight international terrorism in Syria.

The Command wishes to express its deepest condolences to the families of Lieutenant Colonel Oleg Peshkov and Private Alexander Pozynich, who lost his life rescuing the crew. The families of the servicemen will not be left on their own and they will receive all required assistance.