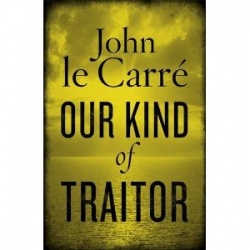 The Russians are here

Veteran spy writer John Le Carre's day might have passed with the fall of the Berlin Wall, but as he tells Today, shadowy Russian influence is still alive and well. Once again, John le Carre has laboured to create. And once again his legion of admirers are poised to digest another despatch from the frontline of the secret world.

"Our Kind of Traitor", the 79-year-old writer's latest work, and number 22 in a line stretching back to Call For The Dead in 1961, is a typically stylish tale featuring divided loyalties, money-laundering and violent vendetta.

Like many of his earlier novels, the new book focuses on Russians. But Dima, the tattooed, bling-laden oligarch at the heart of this new story, is aeons away from Karla, the ruthless and monk-like KGB chief pursued by le Carre's best-known character, George Smiley, three decades ago.

"I was laughed at, in a way, when the Cold War ended and the wall came down," he told Today presenter Justin Webb. "'Poor old Le Carre, what will become of him? Nobody's spying anymore.' "The reality is, the budgets have never been bigger, the recruitment has never been more wholesale."

Today's Russian threat, he says, comes from the oceans of illegally-acquired cash flooding out of the country and into banks around the world, including the UK. "Huge quantities of black money, Russian money, have been kicking around in London for a long time," he asserts. "We chose to ignore it because Russia is, in many ways, a totally criminalized state. We have to bear that in mind. And it is a rich one."

This cash, he believes, helped bolster the UK's banking system during the recent financial meltdown - an intervention happily ignored by those in the know.

"The whole nature of big banking is about looking away," he says.

Often sloppily labelled a "spy novelist", le Carre's literary canvas has consistently exhibited a far richer and wider set of themes, ranging from ethical and moral dilemmas, through notions of loyalty and betrayal, to lyrical examinations of the proper balance of power between state and individual. “ It seems we have lost our nerve slightly ”

And today he is particularly exercised by the UK's reaction to events like 7/7.

Arguing for a restoration of civil liberties, le Carre warns against the insidious power of what some in the United States term the "deep state".

"We have so many people who are indoctrinated, who are admitted to the secrets of state, and we have the people outside the circle. We have a situation where it is possible to go up to MPs as a whip in the House of Commons, as happened I think before the outbreak of the Iraq war, and say: 'If you have seen the papers I have seen, I know how you will vote.' I hope that this new government, before it gets stale, before it starts making all the compromises, will have the courage to break that hold. The jury's still out, I want to believe in them."

And, having served as a British intelligence agent in a bipolar world under a constant nuclear threat, le Carre feels that "it seems we have lost our nerve slightly, with the encouragement of the government."

"I don't think we are comfortable either on the security front, when we suddenly find there are attacks at London airport, or on the foreign front where we are confronted with an enemy we know nothing about. National borders, and national legislation, are absolutely irrelevant. The excuse now, if you will, of British intelligence, on the Iraq front, is that they didn't know anything. That is a pretty large excuse."

And while he condemns terrorism, he believes that "in order to remain a decent democracy, you've got to be ready to take a few hits".

"Something much healthier has happened in our attitude towards the secret world. We no longer buy into the mystique the way we did, because of its successive failures. Iraq is a glaring example, but there have been many others."

As for the old foe, le Carre reacts with insouciance to the recent revelation of a Russian "sleeper" network in the United States.

"I would believe almost anything of the state of Russian intelligence at the moment, which is on the one hand closely involved with Russian crime, on the other hand it is the crucible of the new Russian imperialism. It is a complete mix. It contains people who want Stalin back. It contains people who just want to make a buck. It is a vast, amorphous organisation. Somewhere in that organisation were a bunch of neanderthal intelligence officers who really believed we should do today what we did in the past. This really was a case of fighting the last war."

And le Carre reveals that he once asked a top Russian what Vladimir Putin had been like in the KGB. "He was not very good," came the reply. "We tried to train him for illegal work, after a few weeks it was decided he was completely incompetent for this."

The ending of the Cold War, the author explains, has also seen the demise of the great national struggles which formed the bedrock of his earlier works. Power and ideology have been replaced by the brutish yet direct application of pure wealth.

"For the really high rollers, national borders, and national legislation, are absolutely irrelevant."

But, for all these changes, John le Carre warns that the lessons of the past decades remain as potent as ever.