Wikispooks Comment The Lawrence of Arabia analogy is telling. Strip away the Hollwood heroics and we are left with stereo-typical western abuse, treachery and betrayal of its Arab "friends"

From Benghazi to Turkey, the ISIS “supply lines” are directly from NATO-controlled territory, and apparently it never occurs to the minds of Western media to ask where, in fact, the so-called Islamic State obtains their arms. The reason for this is obvious, as it would demonstrate that the Islamic State is not a homegrown, indigenous Wahhabist extremist group, but western creation, funded and aided like Al Qaeda since its inception, as Carter and Brzezinski openly discussed. Not much has changed in the international terror theater since 1979, save the targets. Counterpunch noted over a decade ago:

Q: The former director of the CIA, Robert Gates, stated in his memoirs [“From the Shadows”], that American intelligence services began to aid the Mujahadeen in Afghanistan 6 months before the Soviet intervention. In this period you were the national security adviser to President Carter. You therefore played a role in this affair. Is that correct?

Brzezinski: Yes. According to the official version of history, CIA aid to the Mujahadeen began during 1980, that is to say, after the Soviet army invaded Afghanistan, 24 Dec 1979. But the reality, secretly guarded until now, is completely otherwise: Indeed, it was July 3, 1979 that President Carter signed the first directive for secret aid to the opponents of the pro-Soviet regime in Kabul. And that very day, I wrote a note to the president in which I explained to him that in my opinion this aid was going to induce a Soviet military intervention.

The London Telegraph would report in their 2013 article, “CIA ‘running arms smuggling team in Benghazi when consulate was attacked’,” that:

[CNN] said that a CIA team was working in an annex near the consulate on a project to supply missiles from Libyan armouries to Syrian rebels.

Weapons have also come from Eastern Europe, with the New York Times reporting in 2013 in their article, “Arms Airlift to Syria Rebels Expands, With Aid From C.I.A.,” that:

From offices at secret locations, American intelligence officers have helped the Arab governments shop for weapons, including a large procurement from Croatia, and have vetted rebel commanders and groups to determine who should receive the weapons as they arrive, according to American officials speaking on the condition of anonymity.

And while Western media sources continuously refer to ISIS and other factions operating under the banner of Al Qaeda as “rebels” or “moderates,” it is clear that if billions of dollars in weapons were truly going to “moderates,” they, not ISIS would be dominating the battlefield.

Recent revelations have revealed that as early as 2012 the United States Department of Defense not only anticipated the creation of a “Salafist Principality” straddling Syria and Iraq precisely where ISIS now exists, it welcomed it eagerly and contributed to the circumstances required to bring it about.”

In terms of foreign policy, the target with ISIS is still Syria, as Washington elites have expounded through their Brookings Institute discussion of June 24, a rebound from the failed attempt by John Kerry to drum up support for war with Syria that fell flat due to the exposure of the laughable false-flag “chlorine attack” propaganda pinned on Assad. Now ISIS is both the means and the raison d’etre for invading and saving Syria, in the classic problem-reaction-solution strategy the West never tires from enacting in the global “freedom” war. 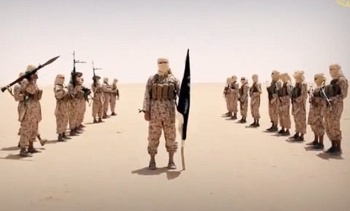 The endless, eternal war on terror is a contrived [[strategy of tension]] the Atlanticist establishment has used for over a hundred years, dating back to the exploits of Harry St. John Philby, T.E. Lawrence carving up the Middle East and Britain’s “extra-special” relationship with Saudi Arabia. Nothing’s essentially changed over the last century other than the focal point of the terror attacks, as the Middle East must constantly be broken up, destabilized and reorganized into “micro-nations” more amenable to Washington’s corrupt corporate and ideological expansionist domination. Recent so-called “terror events” are merely dots on the long timeline of terror, a scripted narrative designed to remodel the American landscape as much as the Middle East according to D.C. think tank machinations.

Wahhabi Saudi Arabia, is of course one of the world’s chief financiers of terror, operating as a proxy for the western elites. Jordan, Qatar, the UAE, Oman, Bahrain and Kuwait are all “Gulf Cooperation nations,” arising from the aegis of the British Empire and adopted under the Pax Americana. And what is constantly forgotten is the origin of this cadre’s alignment of the West through oil production was not merely the result of OPEC and Kissinger, it was in fact organized by Bilderberg: It was Bilderberg that organized the 70s OPEC oil debacle. Isn’t it curious the GCC pro-terror states are also Western-supplying petrocracies? Citing William F. Engdahl in his A Century of War, Andrew Gavin Marshall writes:

One enormous consequence of the ensuing 400 percent rise in OPEC oil prices was that investments of hundreds of millions of dollars by British Petroleum, Royal Dutch Shell [both present at Bilderberg] and other Anglo-American petroleum concerns in the risky North Sea could produce oil at a profit,” as “the profitability of these new North Sea oilfields was not at all secure until after the OPEC price rises.”  In 2001, the former Saudi representative to OPEC, Sheik Ahmed Yamani, said, “’I am 100 percent sure that the Americans were behind the increase in the price of oil. The oil companies were in real trouble at that time, they had borrowed a lot of money and they needed a high oil price to save them.” When he was sent by King Faisal to the Shah of Iran in 1974, the Shah said that it was Henry Kissinger who wanted a higher price for oil. (136-7)

In other words, war is a racket, as General Smedley Butler famously stated, and the new “War on Terror” (TM) of our day is not new, but an updated version of the old British strategy of “containing” Russia. The Atlanticists still charge forward according to the Mackinder Heartland doctrine: the Western merchant/banking sea power must dominate and control the Eurasian “heartland” to ensure no Eastern rivalry. Through the export of Opium, China was subjugated, and through export of Marxism, both China and Russia experienced the havoc of Western-born ideological materialism. 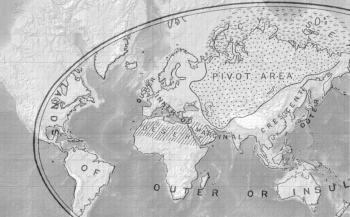 It is precisely this same utilitarian Anglo-empiricist, pragmatist philosophy that has ultimately turned on its own populace in a parasitical fashion unheard of for past empires. Promising sensual and economic utopia, the export of Bolshevism to Russia on the part of the Atlantic banking power is not unlike the top-down social engineering strategy of the corporate elite applied against the U.S. population itself. The great delusion is that the West is “free,” when it is entering an era of incomparably greater enslavement than the Soviet experiment. The only difference is that the foolish Western populace cannot grasp their subjugation is at the hands of Marxist corporations.

The central banks, the Fortune 100, and their shareholders love cultural Marxism and command-and-control, socialist economic models because such parasitic systems are the quickest way to consolidate wealth and transfer the actually valuable assets to the reigning oligarchy. Under such a regime, the opposition will inevitably all be branded “terrorists,” as the appellation is already being extended beyond Saudi and CIA-borne jihadists. And after it reaches the average person, the conditioning will be so strong that any thoughts, words, actions or potential pre-crime actions will also follow under the elastic notion of “terror.”

Terrorism is thus a social weapon, not of indigenous, individual “actors” and lone wolves, but stage-managed dupes, the patsies and tools of an international oligarchical cartel, as Orwell demonstrated in 1984 with the fictional villain of Immanuel Goldstein. Indeed, who funds these groups? (We saw who, above). The most obvious fact of the contradiction of the “War on Terror” (TM) is that it almost always works to further Washington’s domestic and geopolitical aims. Terror, then, is like Trotsky’s notion of perpetual war – perpetual war on the psyche of the globe (it’s acting local and thinking global), as a phase in the dialectical convergence on the path to the World State. And that’s how terror is engineered.