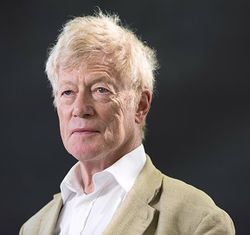 Sir Roger Scruton has died and Britain has lost her greatest conservative thinker, writer, fox hunting man, philosopher and all-round-hero of the right.

Like so many of the bravest and best, he was a prophet almost without honour in his own country.

In the Eastern European countries where he had fought for freedom under Communism, he was properly recognised as a hero: in 1998 President Vaclav Havel awarded him the Czech Republic’s Medal of Merit (First Class) for his work in the Eighties smuggling samizdat literature and encouraging underground networks behind the Iron Curtain; in June 2019, the Polish President awarded him Poland’s Order of Merit; last month (December 2019) President Viktor Orban of Hungary awarded him their Order of Merit, saying he had ‘foreseen the threats of illegal migration and defended Hungary from unjust criticism.’

In Britain, however, he enjoyed a more mixed reputation — epitomised by a shoddy incident following his appointment in 2018 as chairman of the government’s Building Better, Building Beautiful Commission.

Though it was a well-deserved appointment for such an intelligent, architecturally well-informed, civilised thinker with a strong aesthetic, the left couldn’t bear the idea of anyone so shamelessly conservative being given a government advisory role. So an activist journalist from the left-wing New Statesman set out to ambush him — and by twisting Scruton’s words succeeded in getting him ousted from the job.

What was most disgusting about the incident was not so much the cockroach-like behaviour of the scummy leftist hack — one George Eaton — as the reluctance of the cowardly, craven, politically correct Establishment to rise to Scruton’s defence.

As I reported at the time:

The smear — a result of selective editing of the interview and malicious tweeting by the magazine’s deputy editor George Eaton — cost Scruton his job on a government advisory body. Among those who initially condemned Scruton for his alleged remarks were various Conservatives, including MPs Tom Tugendhat, Johnny Mercer and James Brokenshire, and former Chancellor of the Exchequer turned freesheet editor George Osborne.

It was only thanks to some digging from Scruton’s friend Douglas Murray that justice was restored.

But now journalist Douglas Murray has got hold of the original interview recording and analysed the transcripts in the Spectator. What becomes immediately clear is that Scruton was badly misrepresented. Not only is Eaton shown repeatedly trying to provoke Scruton into voicing provocative opinions he doesn’t actually hold, but it is also evident that the version of events Eaton subsequently presented in a series of trolling tweets bears little relation to Scruton’s measured, thoughtful discourse during the interview.

When I interviewed Scruton myself in 2017, we talked about the moment during the 1968 Paris évenéments when Scruton, who had been fairly apolitical up to that point, suddenly discovered he was a conservative.

He had watched the educated children of privilege wantonly destroying the property of their social inferiors in the name of something or other, and realised: "Whatever they are for, I am against." That was the reason he has spent so much of his life since trying to develop a philosophy of conservatism as thorough, persuasive and enticing as the variations on Marxism so compelling to those students.

Later, he provided the most satisfying definition of conservative values I have ever heard.

"Conservatives are people who love something actual and want to retain it."

(Or it could have been attain it – but whatever, the general sense remains. Conservatism, unlike the hate-riddled philosophy of modern leftism, does not define itself in opposition to things nor is it obsessed with theory. Rather it springs from the very things the left is always accusing it of lacking – positivity and love).

My personal favourite of his many fine books is On Hunting. And I was so glad to read in the Christmas issue of the Spectator that as recently as February last year – on his 75th birthday – he was able, despite the protests of his lovely wife Sophie, to ride to hounds one last time.

He concluded his piece in the Spectator:

Falling to the bottom in my own country, I have been raised to the top elsewhere, and looking back over the sequence of events I can only be glad that I have lived long enough to see this happen. Coming close to death you begin to know what life means, and what it means is gratitude.