Document:Request for help from a Ukraine citizen 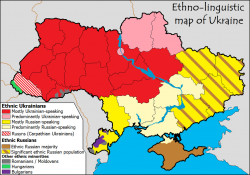 Image right: An ethno-linguistic map of Ukraine. Click to enlarge

Larisa Shevchenko is a resident of the eastern Ukrainian city of Lugansk and has mobilized against the coup activities on the Maidan in Kiev since December 2013.

The original is in German. Translation by blogger Alphai at Cross.tv

This is heartfelt plea addressed to the people of Germany from an activist resident of the city of Lugansk in Eastern Ukraine. It is representative of the position and view of the majority of the population of the South-Eastern half of the country who have major historical connections with Russia and look to Russia for protection from the virulently anti-Russian coup Junta that seized power in the capital Kiev on 22 February 2014.

On behalf of the people of Donbas I turn to you with a request for support. As you know: events have taken place in recent months in Ukraine which caused great agitation and unrest all over the world. We live here in Ukraine and know very well that the reports that have been sent by Ukrainian and Western media from Ukraine and are still being sent, do not correspond to the truth. In these reports the events in Kiev are described as a democratic movement, expression of the popular will and peaceful revolution, the events in the southeastern regions of the country on the other hand as illegal activities by separatists and collaborators.

In reality, the citizens in the southeast of our country have taken to the street since December 2013 as a counterpoint to the Maidan under the slogans "against EU", "against the interference of the West in the Ukrainian politics", "against the disorder on the Maidan"; we are against the illegal actions of people on the Maidan, we support the Berkut units and our conscripts. The media have intentionally concealed or misrepresented these facts and referred to us as "paid activists from Yanukovych".

At present, the situation has escalated - in recent months, many thousands of Ukrainian citizens demanded a referendum because in Chapter 5 of the Ukrainian Constitution the federalization of all regions is provided. But the self-proclaimed government in Kiev did not hear us! On our protests we have pointed out that the self-proclaimed government is not recognized by us as legitimate as the constitutional procedure of impeachment of a president and his cabinet has not taken place. The longer, the more clearly was for us that we are simply ignored by Kiev and obviously not attributed to the Ukrainian people . The junta has their own plans about us and is not even hiding them!

We, the Russian-speaking population of Ukraine, are threatened with total annihilation!

From this understanding of the situation, our leaders in the cities have made the decision to occupy administration buildings in order to attract the attention of the world community. In response, Kiev sent the army, special units of the police, heavy military equipment and mercenaries of a private American security company (Greystone ), which is involved in a lot of scandals. They have permission to shoot sharp. The Special Forces "Berkut" and "Alfa" have already officially denied the criminal orders of arsenic Awakow and stood by the side of the people, and we are sure that the army will also not fire on peaceful people . But the mercenaries scare us! We have already seen what they on 18 - 20th February 2014 have done on the Maidan.

I turn to you, to all citizens of Germany, as a country that has managed to free itself from fascism and defeat it.

Under the leadership of the U.S. and the EU, a whole generation of neo-Nazis has grown in Ukraine that are prepared to eradicate all those who in their opinion do not belong to the "master race". They demand without fear to destroy Russians and Jews , poison us with chemicals in drinking water (through shale gas extraction in the district Donetsk and Kharkov by fracking), they let us without work and as a result with no means of survival . Members of the "right sector" come to our cities and destroy the monuments of the Soviet soldiers, beat and humiliate our veterans of World War II .

To whom shall we turn and ask for support, if not to you, to the German people ? We ask you not to conceal the appeal of the Ukrainian people, but to publish and distribute, so that this cry will be heard by the whole world. As proof of our peaceful intentions and the very broad support of our movement in the population I have collected video material.

We are writing to you with the request to support our efforts for a referendum because we understand that a peaceful solution to the conflict is no longer possible otherwise . The junta is not interested in such a solution and is apparently ready to shed a lot of blood of peaceful people in Ukraine. In view of the fact that our media belong to powerful oligarchs, I am convinced that the world public has been presented false information and invented facts about the conflict in Ukraine and will obviously continue to receive such.

An information blockade has been imposed against the Ukraine; all Russian channels were switched off, the servers and email accounts are hacked and controlled, information and videos on YouTube are blocked and deleted. For the rest of the world it is very difficult with the available information to obtain an adequate assessment of the situation in Ukraine. Currently in Ukraine is a whole army of "experts" and special agents on the go who just think up "news". Let´s remember the Crimea ... The whole world has been able to watch that the referendum on the Crimea was held according to global standards and without violations. The election observers and OSCE mission themselves could see that information from Kiev doe not nearly correspond to reality. The same should now also take place in the southeast of Ukraine.

We, the citizens of Donbas, count on your reason and adequate help.

In behalf of the people,