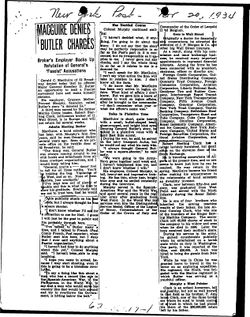 ★ Start a Discussion about this document
MacGuire Denies Butler Charges

A third man named by former marine corps leader, Robert Sterling Clark, millionaire broker of 11 Wall St, is in Europe and will not return for several weeks.

MacGuire, a bond salesman who has been with Murphy's firm five years, said he met General Butler several years ago. Seen at his private office on the twelfth floor of 52 Broadway, he said:

The thing was, General Butler was always coming around to me with books and letterheads from all these crackpot organizations, and I would keep telling him: "General, you're a ---- damn' fool to fall for all those outfits. You'll be holding the bag. Vigilantes of the West, and so on. None of them Fascists, just crackpots." I've kept him out of plenty of trouble and this is what he does to show his gratitude. Everybody told me not to trust him, that he would pull his publicity stunts on his best friends, but I always thought he was a square shooter. I don't know whether I'll ask for a retraction or sue for libel. I guess I will just be the goat in public and I'm probably through here. I've talked to Butler many a time, and I talked to French (Paul Comly French, Post reporter), when Butler sent him here, but I deny that I ever said anything about a Fascist organization.

"I haven't had time to do anything about this yet", Colonel Murphy said. "I haven't been able to stop laughing. I hope you came in armed, because I may start shooting, even if this is going to be a bloodless revolution. To say a thing like this about a man who has a record like me in the Spanish-American War, in the Philippines, in the World War, to say that a man who would serve his country like that would turn around and try to overthrow the Government, is hitting below the belt."

Colonel Murphy continued smiling: "I haven't decided what, if anything, I'm going to do about the story. I do not say that the story may be perfectly responsible in so far as the POST's part in it is concerned; but its irresponsible as it applies to me. I never gave out any checks, and I say the whole thing in so far as it relates to me is a damned lie.

"I can't speak for Mr. MacGuire. I can't say what action the firm will take in relation to him. I don't know all the facts.

"I do know that Mr. Macguire has been very active in legion affairs. What kind of affairs I don't know. But we gave him a leave of absence to work on legion affairs, after he brought in the commander — I don't remember what year or what the officer's name was."

MacGuire is short, quite heavy, with a small bullet-shaped head, close-cropped, and bright blue eyes. Denying General Butler's story, he talked in a plaintive voice with a faint East Side accent.

During the war, he said, he served on the navy transport Aulus, but would not say what his rank was.

"I always thought General Butler was a square-shooter," he said sadly.

"We were going to the Army-Navy game together next week end. I haven't telephoned him yet, and I don't know whether I will."

His employer, Colonel Murphy, is tall, heavy-set and impressive-looking. He has thin, silver hair, bright blue eyes and he smiled constantly during the interview.

Originally a doctor for financially sick corporations, he attracted the attention of J. P. Morgan & Co. and other big Wall Street interests.

Robert Sterling Clark has a rather lavishly furnished, but small office on the eleventh floor of the Stock Exchange.

He is travelling somewhere in Algeria at the present time, and no one seems to know just how he can be reached. He may return in the Spring. MacGuire became his friend after making his acquaintance in the relationship of bond salesmen and wealthy investor.

Clark, now between fifty-five and sixty, was graduated from West Point and served with the Ninth Infantry during the Boxer Rebellion.

He is one of four brothers who inherited the sewing machine wealth of their father, the late Alfred Corning Clark, who was one of the founders of the Singer Sewing Machine Company. The senior Clark left 85,000 shares of stock in the company to his widow and sons when he died in 1896. Later the boys received their mother's share.

During his service in the army, he gained considerable publicity when he entertained on a lavish scale while on duty in Washington. One party, it was reported at the time, cost $30,000. A train was hired to bring the guests from New York.

While he was in China he was granted leave to travel in the interior on an exploring expedition. His regiment, the Ninth, was brigaded with the Marine regiment in which Butler was serving as a youthful officer.

Clark is an ardent horseman, tall and healthy, but not as well known in that field as his brother, F. Ambrose Clark, one of the three brothers whom he sued to break control of a trust in which he had placed his share of the $80,000,000 estate left by his father.