Document:I will wear a poppy for the last time

This article generated over 1,500 (visible) comments on the Guardian site within 24 hours of its publication there.

There has always been a measure of dissent against the remembrance day ceremony; not the the formal acts of remembrance themselves but the appearance, however restrained, of celebrating militarism and the essential rightness (superior morality if you will) of the causes for which those remembered and commemorated died. The ongoing white poppy campaign of the Peace Pledge Union is an overt expression of this dissent that seeks to decouple remembrance from the militarised culture of its official ceremonials - and viciously demonised for doing so it is too.

Smith's "...paper poppies festooning the lapels of our politicians, newsreaders and business leaders" is so telling - The establishment requires them to sport one (Soto-voce, naturally - but no less powerfully for that) - dissent and their careers will be blighted - and don't they know it!

"I will remember friends and comrades in private next year, as the solemnity of remembrance has been twisted into a justification for conflict"
See Also

This year, I will wear a poppy for the last time 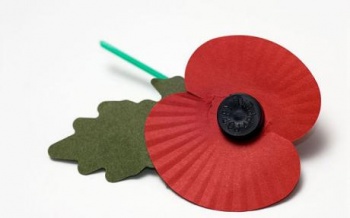 Over the last 10 years the sepia tone of November has become blood-soaked with paper poppies festooning the lapels of our politicians, newsreaders and business leaders. The most fortunate in our society have turned the solemnity of remembrance for fallen soldiers in ancient wars into a justification for our most recent armed conflicts. The American civil war's General Sherman once said that "war is hell", but unfortunately today's politicians in Britain use past wars to bolster our flagging belief in national austerity or to compel us to surrender our rights as citizens, in the name of the public good.

Still, this year I shall wear the poppy as I have done for many years. I wear it because I am from that last generation who remember a war that encompassed the entire world. I wear the poppy because I can recall when Britain was actually threatened with a real invasion and how its citizens stood at the ready to defend her shores. But most importantly, I wear the poppy to commemorate those of my childhood friends and comrades who did not survive the second world war and those who came home physically and emotionally wounded from horrific battles that no poet or journalist could describe.

However, I am afraid it will be the last time that I will bear witness to those soldiers, airmen and sailors who are no more, at my local cenotaph. From now on, I will lament their passing in private because my despair is for those who live in this present world. I will no longer allow my obligation as a veteran to remember those who died in the great wars to be co-opted by current or former politicians to justify our folly in Iraq, our morally dubious war on terror and our elimination of one's right to privacy.

Come 2014 when the government marks the beginning of the first world war with quotes from Rupert Brooke, Rudyard Kipling and other great jingoists from our past empire, I will declare myself a conscientious objector. We must remember that the historical past of this country is not like an episode of Downton Abbey where the rich are portrayed as thoughtful, benevolent masters to poor folk who need the guiding hand of the ruling classes to live a proper life.

I can tell you it didn't happen that way because I was born nine years after the first world war began. I can attest that life for most people was spent in abject poverty where one laboured under brutal working conditions for little pay and lived in houses not fit to kennel a dog today. We must remember that the war was fought by the working classes who comprised 80% of Britain's population in 1913.

This is why I find that the government's intention to spend £50m to dress the slaughter of close to a million British soldiers in the 1914-18 conflict as a fight for freedom and democracy profane. Too many of the dead, from that horrendous war, didn't know real freedom because they were poor and were never truly represented by their members of parliament.

My uncle and many of my relatives died in that war and they weren't officers or NCOs; they were simple Tommies. They were like the hundreds of thousands of other boys who were sent to their slaughter by a government that didn't care to represent their citizens if they were working poor and under-educated. My family members took the king's shilling because they had little choice, whereas many others from similar economic backgrounds were strong-armed into enlisting by war propaganda or press-ganged into military service by their employers.

For many of you 1914 probably seems like a long time ago but I'll be 91 next year, so it feels recent. Today, we have allowed monolithic corporate institutions to set our national agenda. We have allowed vitriol to replace earnest debate and we have somehow deluded ourselves into thinking that wealth is wisdom. But by far the worst error we have made as a people is to think ourselves as taxpayers first and citizens second.

Next year, I won't wear the poppy but I will until my last breath remember the past and the struggles my generation made to build this country into a civilised state for the working and middle classes. If we are to survive as a progressive nation we have to start tending to our living because the wounded: our poor, our underemployed youth, our hard-pressed middle class and our struggling seniors shouldn't be left to die on the battleground of modern life.