Document:Greece Syntagma Square - What Next? 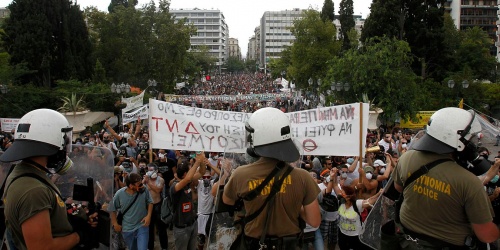 Greece: Syntagma Square, What Next?

"The infliction of physical punishment is not every man's job, and naturally we were only too glad to recruit men who were prepared to show no squeamishness at their task ... I tumbled to the fact that my organization had been attracting all the sadists in Germany and Austria without my knowledge for some time past. It had also been attracting unconscious sadists, i.e. men who did not know themselves that they had sadist leanings ... And finally it had been actually creating sadists. For it seems that corporeal chastisement ultimately arouses sadistic leanings in apparently normal men and women, Freud might explain it."

[Note: The words were uttered in 1934 by Rudolf Diels (1900 - 1957) the "creator" of the Nazi "Geheime Staatspolizei" (Secret State Police), also known as "Gestapo". These words can be found on page 370 of the book "In the Garden of the Beasts" by Erik Larson, published only a few weeks ago by Random House, which is a book that should be read by all decent persons wishing to understand not only the Nazis and World War Two, but also the "quality" of the elites of the world.]

Yesterday, a Wednesday, June 29, 2011, and the day before yesterday, the Greek police at Syntagma Square acted against the people of Athens worse than the Nazis during the 1941 - 1944 Nazi occupation and worse than the police of the military dictatorship of 1967 - 1974. This is written here by a person who has lived through the Nazi occupation and through the military dictatorship.

The tens of thousands of Greeks that "felt" the police brutality, yesterday, might think that Rudolf Diels' words, mentioned above, constitute an understatement.

Meanwhile, the lower part of the square had evolved into a "direct democracy" example of mostly progressive people, with a popular assembly, musical concerts, etc.

Then, the police started gradually to test the situation with minor threatening acts at the fringes of the general area of the Square.

Here is a "portrait" of Pangalos from my interview of December 28, 2008 "Update of the Greek Uprising" with Chris Spannos:

Then, there is Theodore Pangalos, a 70-year-old heavily overweight man, who is proud of his weight as is attested by the story that once with the microphones in the European Union[?] forgotten in active state he attacked Angela Merkel verbally by saying: "Has she ever been fucked by a fat man?", intending thus to show his prowess as a fat man. Pangalos is the grandchild of a military general with the same Christian name, who was a dictator [!] of Greece in 1925. As happens in some cases with the progeny of dictators Pangalos, the grandchild named himself a leftist and entered politics. Actually in the 60s he managed to be close to Mikis Theodorakis, the great composer and heroic figure of the Greek left. When the "socialists" won the elections in 1981 Pangalos joined them and for almost two decades he held ministerial positions in the "socialist" governments, mostly in the Ministry of Foreign Affairs. The "peak" of his career came when in 1999, as a "socialist" Minister of Foreign Affairs, he delivered Ocalan, the leader of the Kurds, to the Turks who is rotting in the Turkish prisons since then. A couple of days ago Pangalos attacked the "Coalition of Radical Left" as "political bums" who supported the hooded rioters that burned, etc. The accusation is so blatantly false that one should ask himself where is Pangalos aiming, why, and who is supporting him in this provocative behavior for almost a half of a century? The fact is that for the last 48 hours all are talking about the word "bums" that Pangalos spat out of his mouth.

The most important facts during the attack of the police against the peaceful citizens of the square was the use of chemicals against them and the "use" of provocateurs. Especially the chemicals were really bad. Both acts will turn into a boomerang against the government.

Also an important event is the heckling and dousing with water of a parliamentarian who thought that he was the people of the Square.

Even more important is, that in Crete following the events in Athens, the population attacked the offices of the parliamentarians on the island of both leading parties and broke everything down. An event, which was unthinkable even a month ago.

On the basis of the behavior of the police at the Square it is not unreasonable to suppose that the government was aiming to have a few dead so that the population could be provoked to turn violent, therefore the tanks would roll in the streets. [The Pangalos case and his threat about the tanks, could be the usual "probing" of the situation by Pangalos' protectors]. Even if the US and European patrons decide on such a "solution", so as to get rid of the unruly and lazy Greeks, they will not succeed, because of the rage of the population and because the army could not be so "docile". By the way, stats show that the Greeks work more than the Germans! If the reaction of the population during the coming days is courageous and full of rage this "solution" might be discarded. So, they will go to plan-B, which could be to salvage somehow the economic "shit" to save the Euro, Europe, whatever, and then go to elections.

Both members of the two-party system, imposed by the US during the last 60 years, the present "socialist" PASOK and the rightist "New Democracy" are politically dead, especially after the chemicals at Syntagma Square. Yet, if "ordered" by Langley, Berlin,and France, in a future election they might form a coalition government a le Merkel. And. if need be, with the help of the "parliamentarian" neo-Nazis.

The communist KKE could get around 10% of the vote. The "Syriza", with eurocommunist roots, could reach around 6%. The Greens could get another 4%. Thus, a total of 20% for the Left could be a voice to be listened to, although there is enmity between the KKE and Syriza and indifference by them towards the Greens. Nevertheless, such an electoral outcome could be the basis for a new movement on the Left with younger people as its foundation.

Hope for the Greeks rests at the Squares of all its cities and towns. 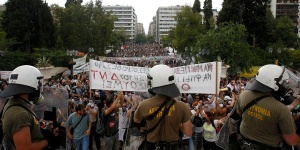