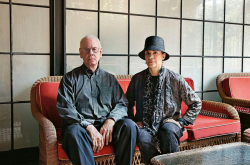 Good commentary on a remarkable interview. Not least because, in addition to Young and Natsios's devastating critique of the Commercially-controlled media generally, it also demonstrates the blinkered cocooned existence passing for "reality", that young Germans - who fancy themselves so "Progressive" - still actually inhabit. This quote from the smug and startled young interviewer is a case-in-point:

We are loyal here to this community. But some inner criticism can be seen as constructive. These questions are important. I suppose you can say whatever you say. We have free speech here.

Free-speech? - Really? How would he explain - let alone justify - the 14 month prison sentence recently handed down to an 87 year old German grandmother - and many others like her - for simply excercising their right to his precious 'Free-speech?'.
See Also

The current corporate media business model of celebrity as an income producer and celebrity as a sensationalizing, titillating device for increasing the value of content is something we stay away from. It’s deeply cynical to sensationalize this trusted transaction, when someone come to you with a document and puts it forward to you. — Deborah Natsios, Cryptome

This week, John Young and Deborah Natsios, the founders of Cryptome, one of the world’s oldest and best-known repositories of leaked intelligence documents, quietly posted a URL to an interview they conducted on February 6 during a conference in Berlin, Germany.

Young and Natsios are introduced, correctly, as “renowned figures within a larger community people interested in keeping governments and institutions accountable, and using documents to do that.” But they also offer deep insights into the media and how it has handled revelations about U.S. intelligence and the National Security Agency. And their remarks, such as the quote above, clearly catch their host by surprise.

In the 18th minute, they issue a scathing rebuke of “celebrity” journalism as practiced, in their opinion, by The Intercept, the publication owned by Pierre Omidyar’s First Look Media. The interview is worth hearing in its entirety, and I urge anyone who’s had questions and concerns about Edward Snowden and his relationship to The Intercept’s founding editors, Glenn Greenwald, Jeremy Scahill and Laura Poitras, to listen to it and carefully consider their arguments.

Why? Because Cryptome raises serious questions that nobody else on the left or in the media want to talk about, including how Omidar has created a business from Snowden’s cache; what exactly Snowden may have been doing while he was working for the CIA prior to his time at NSA (and what else he may have been doing at NSA itself); and why Snowden and The Intercept continue to proselytize for Tor, the anonymization tool, despite its massive funding from the U.S. government, the Pentagon and the national security state.

One of the most amazing moments comes when the host, Pit Shultz, grows nervous about how his questions are being answered. It’s a sad insight into how the libertarian left responds to any criticism of its heroes and the arrogance and vitriol that’s been thrown to people who’ve raised questions about Snowden, Tor or Omidyar’s operations. To his credit, Shultz soldiers on – but only after Natsios assures him that “robust debate” is crucial to democracy.

Cryptome’s critique, as expressed in the interview, is not new. Ever since Greenwald first wrote about Snowden’s documents in The Guardian in 2013, the organization has been keeping careful track of the glacial pace of the documents’ release and The Intercept’s almost-total control over the cache. Their latest tally, posted this week, is 6,318 pages of what The Guardian first reported as 58,000 files.

From the start, Young and Natsios made it clear that they strongly disapprove of the fact that this cache has not been made widely available to the public and posted for all to see – as they have done with the tens of thousands of intelligence files they have released since the late 1990s (and as Daniel Ellsberg did with the Pentagon Papers). Take a look at how Gawker, a publication very friendly to The Intercept, reported on Cryptome in June 2013:

When the Guardian and Washington Post published their blockbuster NSA reports based on Ed Snowden’s leaks, journalists lined up conga-style to congratulate them on the scoops. Not Cryptome. Instead, the secret-killing site blasted the Guardian and Post for only publishing 4 of the 41 slides that Snowden gave them about PRISM, the NSA’s system for spying on the internet.

To longtime followers of Cryptome, this response was unsurprising. Before Wikileaks, before Ed Snowden, there was Cryptome. Manhattan-based architects John Young and Deborah Natsios founded Cryptome.org in 1996 as a repository for documents no one else would publish, including lists of CIA assets, in-depth technical schematics of sensitive national security installations, and copyrighted material. As leaking has created a vibrant media ecosystem in recent years, complete with favored outlets, journalists and sources, Cryptome has positioned itself as its curmudgeonly ombudsman, quietly but blisteringly cutting down the hype and blather it sees in its competitors while advocating a form of radical transparency as straightforward as Cryptome.org’s bare-bones website.

Until now, however, I’ve never seen an analysis like this. What follows is my transcript of key parts of the interview.

Shultz, the host, begins with a discussion with Natsios, who grew up “in a CIA family,” about her art, and then focuses on Cryptome’s roots in the Cold War and its founding in 1996 (Young was also active, with Wikileak’s Julian Assange, in the “cypherpunk” movement in the early 1990s). Throughout their organization’s existence, Young explains, “we did not seek celebrity. We thought we should do public service quietly and non-'ostentatiously. We don’t like high-profile activity because we think it disrupts the process.”

This is already a huge contrast to the approach taken by the The Intercept’s founders. But what follows is stunning. After Natsios makes her statement about “celebrity as an income producer,” Young opens up, first taking on the ACLU.

Young: Let me name some names. ACLU, one of the most corrupt organizations in New York City and around the world. We detest how they’re handling Snowden. They’re using him for funding purposes. Meanwhile, they’re turning down more needy people because they’re not good for fund-raising. Look at what these folks are paid. Phenomenal salaries are being paid. Phenomenal salaries are being paid to The Intercept. These are your corrupt organizations to get these kinds of salaries out there while others who provide the information are either going to jail or getting nothing. I think that’s the pattern that’s going on now under the national security realm. Now I should say the National Security Archives and the Federation of American Scientists do not do that. But some of these newcomers to the national security field are. ACLU is an old organization. But we know people who’ve left ACLU over this issue, because they’ve become money-driven and not public service driven. And they refuse to have anything to do with ACLU. And that’s a tragedy because it once had a wonderful history. Now the question is, who else is on the list? There are others who are smelling the coffee of money-making…

The interview then turns to non-profit journalism, as practiced by First Look.

The next section (not transcribed here) focuses on Tor, the “anonymity tool” promoted heavily by Snowden, Poitras and Greenwald and financed by the U.S. government, primarily through the Pentagon, as well as Omidyar himself – a topic I’ll focus on in a later posting. The discussion appears to disturb the interviewer.

Shultz: We are loyal here to this community. But some inner criticism can be seen as constructive. These questions are important. I suppose you can say whatever you say. We have free speech here.

Natsios: You said that very tentatively and cautiously. You should say that robustly, that robust dissent within any organization is crucial in a democratic context. Don’t apologize for it.

After that exchange, the conversation pivots to a discussion about Snowden’s role as a spy. Young mentions Snowden’s experience before NSA in Hawaii as a counter-intelligence operative for the CIA.

Shultz: [At the conference there was mention of] Snowden as a hero for civil rights. But it was not mentioned he was a spy. How can you trust a spy?

Young: You cannot. You cannot trust anyone with a security clearance…They have to lie to you. It’s not a glorious role, it’s a dirty role.

Young then returns to The Intercept’s relationship with Snowden. He mentions two journalists who came way before Greenwald & Co. and early on exposed the operations of the NSA overseas, Duncan Campbell and Nicky Hager.

Young: I don’t know why Snowden didn’t go to them instead of those assholes he went to. That’s a story that hasn’t been told. Why did he go to these technologically illiterate people to reveal this stuff to? Someone sold him a bill of goods. We don’t know who fed him into this group.

Shultz: So you’re critical about him spoon-feeding the mass media?

Natsios: It’s a second secret regime that’s been imposed by the media proxies. The assumption is there should be a media pathway to the public. Well, that could be a fallacy…If we’re to believes Snowden’s current media proxies and his testimony through them, he’s been extremely cautious and controlling about his release. He wants to have his cake and eat it too. He’s been extremely particular about what he wants to let go evidently and what he keeps in reserve. That’s his choice. But these are taxpayer-paid documents belonging in the public domain. What authority does he have to open the spigot where he is now controlling in a fairly doctrinaire and authoritarian way what happens to this trove, this cache?…

Young: Snowden says he gave them to the public; no, he didn’t. He gave them to a bunch of self-interested journalists who decided to run a certain story with it, i.e., to explain it to people. And their fucking explainers really have a problem.

Natsios: It’s a serious conflict of interest. They’ve written themselves into the story as heroes, co-heroes of the story. It’s a conflict of interest. They’re not at a distance from their source. They’ve embedded themselves in the narrative, and therefore all decisions are highly suspect because they benefit from the outcome of the narrative in every sense.

Young: They should go to people who can read the documents, not report on them. Reporting is not honesty. It is headline grabbing. It is hyper ventilation. And they call it reporting, when in fact it’s highly selective. This is criminal behavior. [Note: in that context, it’s rather amazing to see this tweet from Snowden himself chastising a Washington journalist for being directed in his reporting by a White House official – exactly what Snowden did with his stenographers].

To get its full flavor, I again urge readers to listen to the interview in its entirety. After I heard it, I passed part of this transcript by Bill Binney, the legendary NSA analyst who once was the Technical Director of NSA’s Operations Directorate. He is renowned for blowing the whistle on corporate corruption and illegal surveillance at the NSA, a story I documented in The Nation in 2013 (prior to Snowden’s appearance on the scene, I might add).

Binney, always the humorist, reminded me of a notorious statement made by Sam Visner, a senior NSA official, to a group of contractors a day after the 9/11 attacks: “We can milk this thing all the way to 2015.” Here’s Binney’s email to me about the arguments from Young and Natsios: “As Sam said, ‘we can milk this cow for 15 years.’ It’s just business.”

Cryptome puts it this way: “At Snowden current rate it will take 20-620 years to free all documents.” That’s really milking it. So, yes, “money doesn’t talk, it swears.”

For a full bibliography of Young and Natsios, click here.