ACT: Action Counters Terrorism is a UK government "branding platform" for its "counter terrorism" activity launched in March 2017.[1] This was a successor to the heavily criticised PREVENT strategy.[2]

The March 2017 announcement of the new campaign was headlined Public urged to help communities defeat terrorism with new Action Counters Terrorism (ACT) campaign and stated that "the scale, volume and complexity of the terrorism threat continues to grow, police are advising the public to act to report any potential suspicious activity or online content they come across and are concerned about."

reporting suspicious activity to the police by calling confidentially on 0800 789 321 or at gov.uk/ACT
reporting online terrorist and violent extremist material online
remaining alert at home, work and when out and about, so we can all play our part in defeating terrorism and keeping everyone safe...

Mark Rowley, National Counter Terrorism Policing lead, said: "Since 2014, the threat of terrorism has been severe, which means that an attack is highly likely..."

Security Minister Ben Wallace repeated: "The horror of recent terrorist attacks in Europe and beyond is a shocking reminder of the threat we all face. We know that we are not immune as the threat to the UK is currently assessed as severe, meaning an attack is highly likely... advances in technology make it more complex and challenging for us to spot would-be terrorists because it’s easier for them to be in contact with others and be radicalised in a relatively short space of time."”
(7 March 2017)  [3] 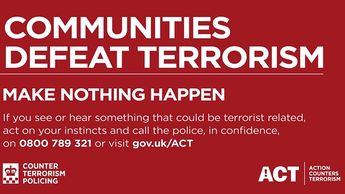 The degree of public response to the ACT:Action Counters Terrorism (ACT) campaign is currently unknown. It is an updating of earlier campaigns about reporting "suspicious activity" an fits the evolving narrative that vulnerable people are "radicalized" by exposure to "violent extremist material online".