Article content is exactly as originally published. The publisher's note was added by Mint Press editorial staff following the furore that publication of the article had provoked.

Evidence that the chemical weapons attacks in Syria are the work of the Syrian rebels and not government forces. This judgement is reinforced by reactions to the article, in particular the treatment of the two reporters concerned. They have been seriously intimidated by elements of both the Jordanian and Saudi security services. Career-threatening pressure from her main employer, 'Associated Press', aimed at getting Dale Gavlak to disassociate herself from the article - and thereby discrediting both the article and its publishers - has been intense.
See Also

For in-depth commentary and analysis of the controversy surrounding publication of this article see:

Dale Gavlak assisted in the research and writing process of this article, but was not on the ground in Syria. Reporter Yahya Ababneh, with whom the report was written in collaboration, was the correspondent on the ground in Ghouta who spoke directly with the rebels, their family members, victims of the chemical weapons attacks and local residents. 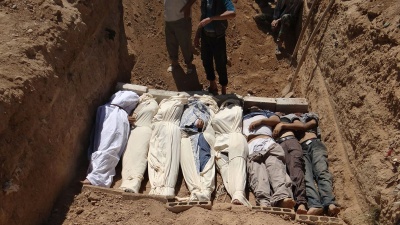 This image provided by by Shaam News Network on Thursday, Aug. 22, 2013, purports to show several bodies being buried in a suburb of Damascus, Syria during a funeral on Wednesday, Aug. 21, 2013, following allegations of a chemical weapons attack that reportedly killed 355 people. (AP Photo/Shaam News Network)

Ghouta, Syria — As the machinery for a U.S.-led military intervention in Syria gathers pace following last week’s chemical weapons attack, the U.S. and its allies may be targeting the wrong culprit.

Interviews with people in Damascus and Ghouta, a suburb of the Syrian capital, where the humanitarian agency Doctors Without Borders said at least 355 people had died last week from what it believed to be a neurotoxic agent, appear to indicate as much.

The U.S., Britain, and France as well as the Arab League have accused the regime of Syrian President Bashar al-Assad for carrying out the chemical weapons attack, which mainly targeted civilians. U.S. warships are stationed in the Mediterranean Sea to launch military strikes against Syria in punishment for carrying out a massive chemical weapons attack. The U.S. and others are not interested in examining any contrary evidence, with U.S Secretary of State John Kerry saying Monday that Assad’s guilt was “a judgment … already clear to the world.” [1]

However, from numerous interviews with doctors, Ghouta residents, rebel fighters and their families, a different picture emerges. Many believe that certain rebels received chemical weapons via the Saudi intelligence chief, Prince Bandar bin Sultan, and were responsible for carrying out the dealing gas attack.

“My son came to me two weeks ago asking what I thought the weapons were that he had been asked to carry,” said Abu Abdel-Moneim, the father of a rebel fighting to unseat Assad, who lives in Ghouta.

Abdel-Moneim said his son and 12 other rebels were killed inside of a tunnel used to store weapons provided by a Saudi militant, known as Abu Ayesha, who was leading a fighting battalion. The father described the weapons as having a “tube-like structure” while others were like a “huge gas bottle.”

Ghouta townspeople said the rebels were using mosques and private houses to sleep while storing their weapons in tunnels.

Abdel-Moneim said his son and the others died during the chemical weapons attack. That same day, the militant group Jabhat al-Nusra, which is linked to al-Qaida, announced that it would similarly attack civilians in the Assad regime’s heartland of Latakia on Syria’s western coast, in purported retaliation. [2]

“When Saudi Prince Bandar gives such weapons to people, he must give them to those who know how to handle and use them,” she warned. She, like other Syrians, do not want to use their full names for fear of retribution.

A well-known rebel leader in Ghouta named ‘J’ agreed. “Jabhat al-Nusra militants do not cooperate with other rebels, except with fighting on the ground. They do not share secret information. They merely used some ordinary rebels to carry and operate this material,” he said.

“We were very curious about these arms. And unfortunately, some of the fighters handled the weapons improperly and set off the explosions,” ‘J’ said.

Doctors who treated the chemical weapons attack victims cautioned interviewers to be careful about asking questions regarding who, exactly, was responsible for the deadly assault.

The humanitarian group Doctors Without Borders added that health workers aiding 3,600 patients also reported experiencing similar symptoms, including frothing at the mouth, respiratory distress, convulsions and blurry vision. The group has not been able to independently verify the information.

More than a dozen rebels interviewed reported that their salaries came from the Saudi government.

In a recent article for Business Insider, [3] reporter Geoffrey Ingersoll highlighted Saudi Prince Bandar’s role in the two-and-a-half year Syrian civil war. Many observers believe Bandar, with his close ties to Washington, has been at the very heart of the push for war by the U.S. against Assad.

“Prince Bandar pledged to safeguard Russia’s naval base in Syria if the Assad regime is toppled, but he also hinted at Chechen terrorist attacks on Russia’s Winter Olympics in Sochi if there is no accord,” Ingersoll wrote.

“I can give you a guarantee to protect the Winter Olympics next year. The Chechen groups that threaten the security of the games are controlled by us,” Bandar allegedly told the Russians.

“Along with Saudi officials, the U.S. allegedly gave the Saudi intelligence chief the thumbs up to conduct these talks with Russia, which comes as no surprise,” Ingersoll wrote.

“Bandar is American-educated, both military and collegiate, served as a highly influential Saudi Ambassador to the U.S., and the CIA totally loves this guy,” he added.

According to U.K.’s Independent newspaper, it was Prince Bandar’s intelligence agency that first brought allegations of the use of sarin gas by the regime to the attention of Western allies in February. [5]

The Wall Street Journal recently reported that the CIA realized Saudi Arabia was “serious” about toppling Assad when the Saudi king named Prince Bandar to lead the effort. [6] “They believed that Prince Bandar, a veteran of the diplomatic intrigues of Washington and the Arab world, could deliver what the CIA couldn’t: planeloads of money and arms, and, as one U.S. diplomat put it, wasta, Arabic for under-the-table clout,” it said.

Bandar has been advancing Saudi Arabia’s top foreign policy goal, WSJ reported, of defeating Assad and his Iranian and Hezbollah allies. To that aim, Bandar worked Washington to back a program to arm and train rebels out of a planned military base in Jordan.

The newspaper reports that he met with the “uneasy Jordanians about such a base”:

His meetings in Amman with Jordan’s King Abdullah sometimes ran to eight hours in a single sitting. “The king would joke: ‘Oh, Bandar’s coming again? Let’s clear two days for the meeting,’ ” said a person familiar with the meetings.

Jordan’s financial dependence on Saudi Arabia may have given the Saudis strong leverage. An operations center in Jordan started going online in the summer of 2012, including an airstrip and warehouses for arms. Saudi-procured AK-47s and ammunition arrived, WSJ reported, citing Arab officials.

Although Saudi Arabia has officially maintained that it supported more moderate rebels, the newspaper reported that “funds and arms were being funneled to radicals on the side, simply to counter the influence of rival Islamists backed by Qatar.”

But rebels interviewed said Prince Bandar is referred to as “al-Habib” or ‘the lover’ by al-Qaida militants fighting in Syria.

Peter Oborne, writing in the Daily Telegraph on Thursday, has issued a word of caution about Washington’s rush to punish the Assad regime with so-called ‘limited’ strikes not meant to overthrow the Syrian leader but diminish his capacity to use chemical weapons: {{QB| Consider this: the only beneficiaries from the atrocity were the rebels, previously losing the war, who now have Britain and America ready to intervene on their side. While there seems to be little doubt that chemical weapons were used, there is doubt about who deployed them.
It is important to remember that Assad has been accused of using poison gas against civilians before. But on that occasion, Carla del Ponte, a U.N. commissioner on Syria, concluded that the rebels, not Assad, were probably responsible. [7]

Note: Some information in this article could not be independently verified. Mint Press News will continue to provide further information and updates.

Dale Gavlak is a Middle East correspondent for Mint Press News and has reported from Amman, Jordan, writing for the Associated Press, NPR and BBC. An expert in Middle Eastern affairs, Gavlak covers the Levant region, writing on topics including politics, social issues and economic trends. Dale holds a M.A. in Middle Eastern Studies from the University of Chicago.

Yahya Ababneh is a Jordanian freelance journalist and is currently working on a master’s degree in journalism, He has covered events in Jordan, Lebanon, Saudi Arabia, Russia and Libya. His stories have appeared on Amman Net, Saraya News, Gerasa News and elsewhere.