Document:British Skripal Narrative Fails the Occam's Razor Every Step of the Way 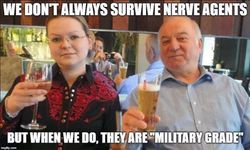 I’m a bit snowed under with things at the moment, and so haven’t got time to do a big post, but I did want to start a new thread as the old thread is a worn-out thread, and we don’t want a worn out thread, do we?

Firstly, I’d like to thank the UK Defence Secretary, Gavin Williamson, who in a Tweet, which he subsequently deleted, wrote in response to the new Bellingcat Report:

“The true identity of one of the Salisbury suspects has been revealed to be a Russian Colonel. I want to thank all the people who are working so tirelessly on this case.”

Secondly, I was somewhat amused to see a commenter on the previous thread refer to Occam’s Razor in reference to the Salisbury case. Apparently “Occam says that Russia assassinates Russian traitors, ergo Russia attempted to murder the Skripals”.

As a reminder, here is what Occam’s Razor is all about:

“Occam’s razor is the problem-solving principle that the simplest solution tends to be the right one. When presented with competing hypotheses to solve a problem, one should select the solution with the fewest assumptions.”

Now, if Mr Skripal had dropped dead at his doorstep from symptoms consistent with exposure to the deadliest nerve agent on the planet, and if Petrov and Boshirov had actually been seen at the house, then there may have been a case for “Russia murdering Skripal with the world’s deadliest nerve agent” as being Occam’s most plausible explanation (although of course, there are plenty of others who might have done that and indeed could have done it). But of course this didn’t happen. Far from it.

So what would Occam actually have made of the Skripal case? Let’s see:

The official narrative says that Sergei and Yulia Skripal were poisoned at the door handle of his house, yet it also says that they collapsed on a park bench, simultaneously, some 4 hours later.

Occam’s verdict: They were probably poisoned near the bench.

2. The official narrative says that the substance used to poison them was a military grade nerve agent, 5-8 times more toxic than VX, and of “high purity”.

Yet not only did they not die on the spot, but they went into town, fed some ducks, had a meal and a drink, before collapsing on a bench, simultaneously, with symptoms far more in keeping with an incapacitant, such as Kolokol-1, for instance.

Occam’s verdict: They were probably poisoned by an incapacitant, such as Kolokol-1, not a military grade nerve agent.

3. The table they ate at in Zizzi's was subsequently taken away and incinerated, apparently because it was heavily contaminated with “Novichok”. Yet literally hundreds of people came into contact with items they touched before they got to the table, without becoming contaminated. This includes the three boys who received bread from Mr Skripal’s hands (one of whom ate a piece). It includes the hundreds of people who would have touched the ticket machine in Sainsbury’s car park before it was cordoned off on 12th March (eight days after the incident). It includes the dozens of people who touched the door handles at Zizzi's and 'The Mill' throughout the rest of 4th March and some of 5th March (yes, they touched more door handles than just the one at Chez Skripal that day). And let’s not forget the policemen who entered the house before the door handle theory was conjured up.

Occam’s verdict: Their hands were not contaminated with military grade nerve agent when they touched these things.

Occam’s verdict: The folks at Porton Down refused to identify the substance used on 4th March as one of the series A-230-A-234 because it wasn’t.

5. The Metropolitan Police have made their case, and yet their timelines are full of holes. For instance, they have given out incomplete timelines and then conspicuously failed to update them, such as the movements of the Skripals on the morning of 4th March. They have reversed the timeline from what all the early reports and witnesses testified to, that the Skripals visited Zizzi's first then 'The Mill', and they have done so without explaining how all those witnesses could be so wrong. They have left crucial details out of their timelines, such as the duck feed at 13:45. They have been absurdly vague in other timelines, such as the claim that Mr Skripal’s car was seen in London Road, Churchill Way North, and Wilton Road, all at 9:15am. And they have altered timestamps on some images (i.e. the Gatwick entrance images), and added them to others (i.e. most of those of Boshirov and Petrov on 4th March).

Occam’s verdict: There’s a massive cover up going on, and more than a little incompetence.

We could go on for a long time, but let’s leave it with one more:

It is claimed that Sergei Skripal was deliberately poisoned by Ruslan Boshirov and Alexander Petrov, at the door handle of his house on 4th March. Mr Skripal has been out of hospital for over four months now. And yet he has not been seen in public, there have been no public statements from him, and he has not been in contact with his mother, who I understand recently turned 90.

Occam’s verdict: Where is Sergei? He’s either dead, or he can’t be prevailed upon to make a statement backing up the official narrative, because he knows it isn’t true.[1]