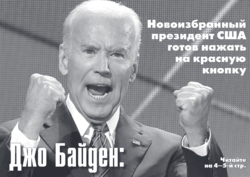 On 20th of June this year Off-Guardian published an article about a Donetsk film’s "planned interference in the US Presidential Election” [1] The new spy thriller Alpha R, which was being shot in Donetsk for a release later this autumn, features a “warning shot” about a possible escalation of the New Cold War on the part of the American ‘deep state’, if there was (the-then only hypothetical) Joe Biden electoral victory.

Producers were rather astute assuming the latter was quite likely. To make sure the joke about “interference” would not be taken seriously and used by an anti-Russian lobby, they postponed the world-wide and the US premier until after the US elections. Now that Biden is apparently winning the election, they are planning to screen the film in New York in early December.   A special “future” issue of Slovo (a weekly newspaper that is regularly delivered to President Putin) was printed for the film. The headline ‘from the future’ reads:  Joe Biden: “We will tear Russia apart” – The new master of the White House is ready to push the red button”.

Biden’s “reputation” in Donbas and in the eyes of the film’s authors shouldn’t come as a surprise as he and his son are considered in Donbass to be the perpetrators of the war unleashed by Kiev’s marionette “authorities”. The fifth episode of the series ‘MH17 Inquiry’ called “It was a MIG” (also produced by same team as ‘Alpha R'), provides insight into their role in this conflict [2]

Another sequence in Alpha R, which sets itself a goal to upstage the creators of the finale of the film Terminator 3, tells how Russia’s still operational “Perimeter” system (known in the West as ‘Dead Hand’) would work if someone attempted to attack Russia. American Army Generals often look somewhat queasy when they answer journalist’s questions about this system.

In Alpha R Russia’s RVSN “Dead Hand” control team performs a salvo of retribution from a fictional nuclear base in the Ural Mountains.

“We hope that as in the finale of ‘'Terminator 3’', this doomsday scenario (which even in the film is depicted as as one of the most unlikely and most undesirable outcomes) will never actually happen. The goal of our film is peace, but in order for us all to value it more, we must show the true cost of war.”

It is the first film in almost 40 years, which depicts a nuclear exchange between the United States and Russia. Its famous predecessor, The Day After, was first aired on 20th of November, 1983, on ABC. More than 100 million people, in nearly 40 million homes, watched the film. Now that Joe Biden’s victory will inevitably fuel ‘Alpha R’ PR upcoming campaign, the film’s producers count on an even bigger international audience. They are saying that

"America’s President will have a chance to see the movie, to be delivered to him on a pirate-proof disk, before everyone else save for his Russian counterpart, Vladimir Putin, China’s Xi Jinping and a Middle-Eastern leader"

whose name the producers are not disclosing.