William Alexander "Rip" Robertson Jr. was a US Marine and CIA Contract officer.

Rip was a U.S. Marine Officer who served during WW II and in Korea. His birth date is August 3, 1920 according to his CoD.

Robertson joined the CIA and worked on Operation Tilt.[1] He was involved in CIA backed Congolese Operation supporting Col. (Mad) Mike Hoare from 1964-1966.

Rip Robertson and a band of 17 heavily armed Cuban expatriates[2] landed in the Congo on November 22, 1964. Their goal was to support Col. "Mad Mike" Hoare in his efforts to put down the Congolese Rebels. This effort was backed squarely by the CIA and the President of the United States was briefed daily of this campaign in the "Presidents Daily Briefing" (PDB) that only he read. It was reported that Rip and Mike got along famously which made the mission go even smoother. Mike highly praised his CIA (Including Rip Robertson) and CIA backed Cuban fellow fighters[3] on their exploits and fierce fighting ability.

In a 1994 letter, Bradley E. Ayers named Rip Robertson as one of 9 people based at JM/WAVE with "intimate operational knowledge of the circumstances surrounding the assassination" of John F. Kennedy. The others were Edward Roderick, Gordon Campbell, Grayston Lynch, Theodore Shackley, Felix Rodriguez, Thomas Clines, David Morales, and Tony Sforza.[4] 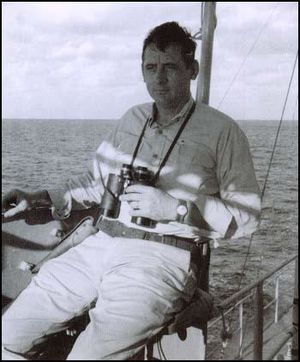