Troy Boner was a victim of the Franklin child prostitution ring who testified to Gary Caradori, which he later recanted. On learning that Caridori had been killed when his small plane broke up in flight, Boner recanted his recantation with a 15 page affidavit.[1] He was later found dead of a drug overdose.

After his brother was found dead, Troy Boner recanted his testimony. A 1990 summary of a phone conversation reveals that his mother reported that he felt threatened.[3] 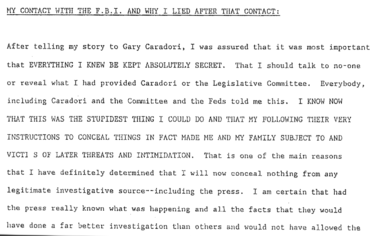 After his interviewer, Gary Caridori, died in a plane crash, Boner recanted his original recantation, producing a 15-page sworn affidavit on 27 October 1993 that explains why he lied after his FBI meeting.[1][4]

Troy Boner died of a drug overdose[4] in 2003, reportedly in a hospital after expressing his concern that he was being pursued.[5]