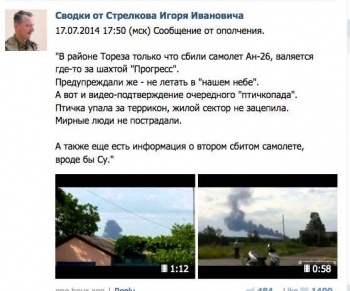 Screen grab of the post, time-stamped 40 minutes after the MH17 crash. [1] The post itself was deleted soon after posting.

This from the VOX article that posted the screen grab:

Armed rebels shooting down a civilian airliner they'd mistaken as a military plane is sadly within the realm of possibility. But the strangeness surrounding Strelkov's posts should cast doubt on conclusions that he or his forces were directly responsible, at least until further evidence comes in. [1]