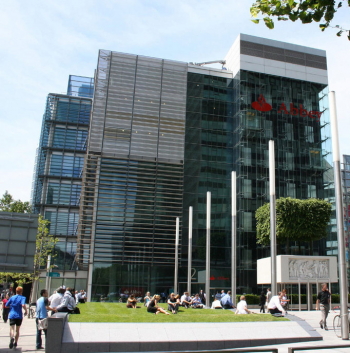 Richard Chang was a senior Risk Business analyst with Abbey National employed in their City of London HQ. He was a happily married family man with 2 teenage children when he died on 13th July 2004 in a fall from the 5th floor atrium balcony of the Abbey National HQ Building at 2 Triton Square, Euston, London. The verdict at the Coroner's Inquest was suicide. The parents, sisters and friends of Richard Chang do not believe he committed suicide.

The police decided that Richard had committed suicide very early on in their investigation and everything was slanted towards that decision from the beginning. The police came to the conclusion it was a suicide because of:

So what was wrong with their decision?

Three forensic reports concluded that the possibility that the signature is not genuine cannot be ruled out but the police have refused Mr and Mrs Chang's repeated request to test the original note for authenticity. Richard was told not to bring anything to the meeting. Howard Jones said he saw Richard with a notepad in the meeting. The notepad was never found. The Coroner refused permission for Mr and Mrs Chang's legal representatives to ask any questions relating to the alleged notepad.

Alastair Beattie, the only person who claims to have seen Richard climb over the balcony is not a reliable witness. His witness statement and testimony at the inquest contain major discrepancies relating to descriptions and times. Beattie started working at Abbey five weeks before Richard died. His statement describes him as a senior business analyst. His background is in psychology, NLP and training by Guyanese Defence Police in jungle survival techniques.

The press officer for Abbey National said in his witness statement that he saw Richard in his office on the fifth floor at 12.30. Howard Jones and Peter Pender-Cudlip said that Richard was in the meeting between 10.45 to 1pm and did not leave the room. It is impossible for Richard to have been in two places at the same time. A witness approached the family soon after the death and confirmed that they saw Alastair Beattie being called to the CEO's office with Richard's possessions in his hands before he had spoken to the police.

Howard Jones was at the centre of a suspicious death. The senior investigating officer was influenced by the narrative provided by Jones. Jones's involvement in the events of the day is suspicious because:

There is prima facie evidence that the tape was edited before being handed to the police: Vincent Santeng (the other person to be interrogated at 1.30pm) stated under oath at the inquest, that the recording of his own interrogation had been heavily edited. He alleged the parts relating to harassment and his race have been removed. Abbey claim that Kroll did not inform them they were going to record the interrogations.

Nathan Bostock (Head of Abbey Treasury service), Karen Fortunato (Company Secretary), Robin Parkinson (Legal Manager) told the police that the FSA had advised Abbey that whoever wrote the anonymous document was a threat to security. This was the main reason given to the police why Richard had been called into the meeting, without notice that he was to be interrogated and hence denied his employment right to have a representative present to ensure fair play. The Employee Relations Officer said he had a feeling that someone was going to be mistreated by management. The FSA have confirmed in writing that they did not give any advice to Abbey about the anonymous document. 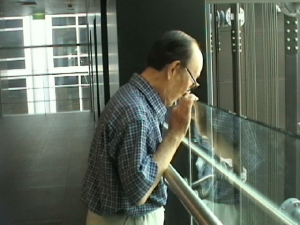 Mr Michael Chang (Richard's father) stands at the spot where Richard allegedly threw himself to his death. Richard was the same height as his father - 5ft 4" or 1.52 metres. 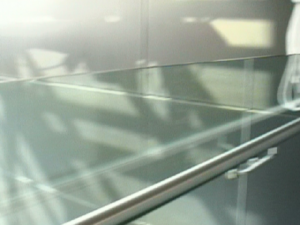 The pathologist who carried out the post mortam was Dr Freddie Patel. Under the heading: "Marks of violence. Treatment and identification", the post-mortem report stated:

Large gaping deep laceration on the forehead and involved the left eye. Severe compound skull fractures with extruded brain tissue received in separate bag. Triple small circular bruises in a line on right shoulder. And red bruise to the front on right upper arm. Small red abrasion on right elbow. Superficial abrasions on the shins and front of the ankles. Fracture deformity of left leg. No other significant marks of violence. The pathologist conducted the post-mortem based on the fact that the death was not suspicious.

A forensic post-mortem was not carried out. The pathologist did not turn up at the inquest so The familiy's legal representatives were not able to put further questions to him. Freddie Patel, the pathologist made a mistake in the Anthony Hardy case about the cause of death. He ruled that the victim had died of natural causes when in fact she had been murdered (see below).

Other post-mortems conducted by Dr Patel

Anthony Hardy killed three women and mutilated two of them to satisfy his "depraved and perverted" sexual cravings was jailed for life. Anthony Hardy dismembered two of his victims, leaving their body parts in bin bags near his home in Camden, north London. Nine months earlier officers had discovered the body of another woman in his flat, but her death had been put down to natural causes by Dr Patel. Dr Patel claimed that she died of a heart attack and not foul play. However, her death from "natural causes" would later be questioned when the remains of other women were discovered in Hardy's flat. The Inquest dismissed marks of violence. [2]It emerged that Hardy had also previously been investigated about a series of rapes. He pleaded guilty at the Old Bailey to all three murders. [3] 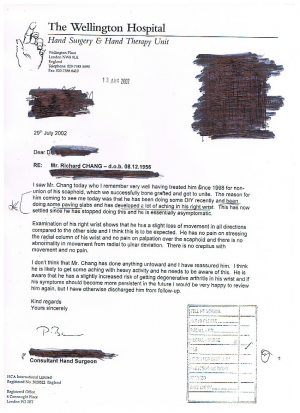 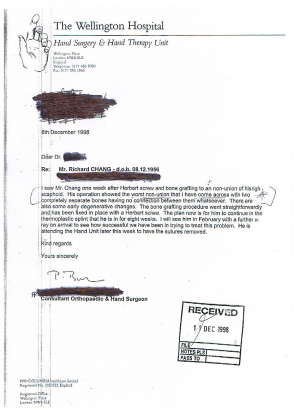 Medical records prove conclusively that Richard did not have any history of mental illness. They also show Richard had a weak right wrist due to an injury he sustained about 15 years earlier. It has been confirmed at the time of his death that his wrist was arthritic. Beattie’s statement states ‘He had his hands on the metal railing and raised himself up’.

The Next of Kin

Richard’s wife informed Richard’s mother she would get to the bottom of things. At the inquest her legal representatives did not ask a single question. At the inquest she incorrectly said Richard had a left wrist injury that was fully functional at the time of his death. Medical records show that when Richard was alive, she was present in several meetings with the hand surgeon to decide if Richard should have corrective surgery on his right hand.

Richard’s wife confirmed to the Times in a press statement after the inquest that her husband had been deceived into attending the interrogation where he was bullied and hectored.

In a letter responding to Mrs Chang’s invitation to join in taking legal action against Abbey, she said “ I thought about this myself for a while but I believe the only outcome would be that Abbey would attack Richard’s good name with all the vast means at their disposal…..As a result, I will not be joining you in any legal actions.”

The widow wrote a letter to the Metropolitan Police stating that no information was to be released without her consent. As a result Mr and Mrs Chang were never informed by the Metropolitan Police until two months after the death about the circumstances of their sons' death. Abbey National never sent their condolences to Mr and Mrs Chang until March 2006, well over a year after the death. Most recently on the fourth anniversary of Richard’s death, Abbey National has refused to allow the family into the building to lay some flowers and say some prayers and in future. They have stated that “they do not consider our building an appropriate venue for a remembrance service. We are not able to accommodate any visit this year (or in future years).”

The Coroner and Health and Safety Executive

Health and safety have confirmed that they received a call a few days after the death telling them that the police were treating the death as a suicide. The Coroner did not give his consent for the police report to be released to the health and safety team even though they had requested it. As a result they did not know that the death was related to an incident at work and as a result no investigation was ever done on their part.

The Coroner and ACAS

(an organisation devoted to preventing and resolving employment disputes.)

The Coroner stated that he would be making a report in which he would make recommendations and ACAS would be invited to look at it. ACAS have confirmed that they have never received a copy. The Coroner will not confirm if he sent a report and has informed the family that he will return letters to the family unopened.

Calls made on the day

Richard called his mother at 9.15am telling her that he would be arriving in Birmingham at 6pm that evening with his family. Howard Jones stated that the interrogation started at 10.45am and lasted until 1.05pm. Richard's wife spoke to him by telephone at 10.57am, 11am, and 1pm during the interrogation. His wife said that in their last conversation Richard said he would call her back after the meeting had finished but never did. Richard's line manager who was also interviewed 1.30-2.30pm called Richard at 1.18pm. He said that Richard told him that he would meet him back at his desk in 5 minutes but never turned up.

Richard's colleagues from Abbey National informed the family that it was highly suspicious and that Richard would not have taken his life. They gave witness statements to the police concerning senior directors and alleged corruption and these were never followed up by the Police, CPS or the Coroner, Dr Anthony Reid.