Rear-Admiral Nick Wilkinson (born 1941) is the retired DA-Notice Secretary (1999-2004) at the Defence, Press and Broadcasting Advisory Committee (DPBAC) which provided the commercially-controlled media with guidance on covering security matters.[1][2] In 2015, the DPBAC was replaced by the Defence and Security Media Advisory (DSMA) Notice System.[3]

In May 2009, Wilkinson's book "Secrecy and the Media" - based on official documents, many of which had not previously been available to a general audience, as well as on media sources - was published.[4]

British Admiral Nick Wilkinson has been accused by Patrick Haseldine of having told the BBC to quit mentioning South Africa in connection with the investigation of the Lockerbie bombing. Mr Haseldine, once himself employed by the Queens Service, has been posting several messages and essays on a possible South African connection in the downing of Pan Am 103 over Lockerbie. Now, Admiral Wilkinson strikes back with this message:

"On 14 February 2001 Patrick Haseldine alleged on this site that Admiral Nick Wilkinson, Secretary of the UK's D-Notice Committee, had reminded the BBC of the complete ban on any mention of South Africa in connection with Lockerbie. Nick Wilkinson wishes to make clear that he has not been in touch with the BBC or any other part of the media in connection with alleged links between South Africa and Lockerbie, nor is he aware of any 'ban', nor would he have felt it necessary anyway to offer advice on any of the matters listed by Mr Haseldine as 'deleted references', nor did Mr Haseldine contact him to verify his allegations about D-Notice involvement before putting the incorrect information on the Internet."[6]

In his 2009 book, Wilkinson referred to an article in the Sunday Times of 17 December 1989 on the December 1988 Lockerbie bombing. In this the newspaper reported the activities of the MOD's Royal Armament Research and Development Establishment, and of one of its forensic investigators in particular (thought to be Alan Feraday), drawing a strong protest from RARDE about the thus heightened terrorist threat to its employees. The name was already in the public domain as a forensic witness in other cases, no other damage to national security was done by the article, and the authorities agreed it had not heightened the threat to RARDE.[7]

Nick Wilkinson joined the Press Complaints Commission (PCC) on 1 July 2005, replacing Arthur Hearnden. He was expected to be followed a year later by Ian Nichol, 50, an accountant and member of the Criminal Cases Review Commission, who would replace Bishop John Waine. The PCC had 10 public or "lay" members without any connections to newspapers or magazines alongside its seven representatives from the newspaper industry. They were appointed by an independent appointments commission following public advertisement and interview:

"In Nick Wilkinson and Ian Nichol, the appointments commission has found two rigorously independent individuals who will bring a great deal of experience, and differing perspectives, to the commission's work," said the PCC chairman, Sir Christopher Meyer.

The Press Complaints Commission closed on 8 September 2014 and has been replaced by the Independent Press Standards Organisation (IPSO).[9] 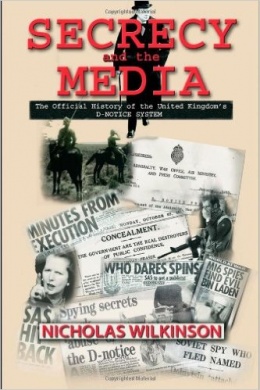 "Secrecy and the Media", heavily redacted by the DA-Notice Committee

The Times reported that the book - having been cleared by the Security Service (MI5), the Secret Intelligence Service (SIS/MI6), GCHQ, and the Foreign, Home and Cabinet Offices - ran into trouble when it hit the MoD. Specifically, according to The Times, the book was harshly criticised by Wilkinson's successor at the DA Committee, Air Vice-Marshal Andrew Vallance. (The Secretary of the Committee is normally a retired senior military officer.) Vallance apparently argued that the book should be binned, not for spilling state secrets, but because it was "turgid" and poorly written.

If true, this would be highly uncharacteristic behaviour for the MoD, an organisation which publishes turgid prose by the ream every day of the week. On the other hand, the MoD is well known for suppressing anything which might embarrass it or its political masters. Vallance's opinion of "Secrecy and the Media" does seem to be bad, however:

“It was awfully written. I’ve read it twice and it was an agony to read. It’s turgid. One of the sentences in it was 130 words long. It’s just poor history."

"It would be ungentlemanly for me to say anything about an elderly official in the twilight of his brilliant career.”

According to The Register, Cambridge historian Christopher Andrew, who was in the course of writing a history of MI5, was called in to referee the scuffling retired officers. He begged to differ with Vallance, saying the book was perfectly OK for style, structure and content. The MoD remained unsatisfied, however, and requested that the book be cut short to stop at 1991 which rather suggests that the literary-merit argument, while perhaps not purposely intended as a smokescreen by Vallance himself, had effectively functioned as one - masking the MoD's wish to suppress all insider discussion of its relations with the media in the modern era. In the end, a compromise was reached and the book now runs up to 1997 - missing out all the good stuff about 9/11, secret dossiers, Iraqi WMDs, procurement failures and the colossal long-running budget foul-ups which began at the MoD in the late '90s and are still paralysing it. There might also have been some good insights into the vicious new culture of secrecy and intensive news management at the Ministry, which has increased massively in the last few years following action by Geoff Hoon, defence minister from 1999-2005. A lot of dirty work took place at the MoD in the Hoon years; and the former Defence Secretary returned to the Cabinet in 2007. Gordon Brown's need for allies allowed Geoff Hoon to recover after a well-merited demotion following the horrific MoD budget cockups of 2004, which saw 10 per cent of the Army infantry cut to save money even as the UK was fighting one large infantry war and about to enter another. And this took place, one should remember, against a background of rising defence budgets and large supplements from Treasury reserves. One might very reasonably speculate, then, that other factors than a literary spat between two retired officers lay behind the MoD's desire to cut the last 5 chapters off "Secrecy and the Media". But not to worry. The missing years, we are assured, will be covered at some future point - when the present government and generation of officials have left power and can no longer be touched. That, indeed, is classic MoD behaviour.[10]

Nick Wilkinson is a Visiting Lecturer at Marlborough Summer School (Visiting Tutor, Advanced Studies in England). He is Chairman of the Savile Club which was established in 1868 in Mayfair by a "distinguished group of men interested in intelligent discussion, especially of the arts and sciences, in relaxed and convivial company."[11]