Michael Segalov is a contributing editor at Huck magazine, a columnist at VICE and freelance journalist and author.

Segalov writes regularly for The Guardian, The Independent and a number of other publications.[1]

Michael Segalov joined Labour to vote for Jeremy Corbyn. Here's what he has to say on antisemitism:

There's no getting around it, talk of Brexit is becoming tiring. You're not alone in feeling like you're starting to not care. This process will be one of the most important events for generations though, so it's time we find a better way to engage with our departure from Europe than this never-ending news cycle, writes Michael Segalov. 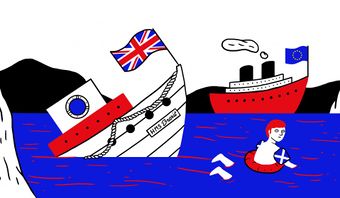 My name is Michael, I'm 24-years-old, and I’m really, really bored of Brexit. You honestly don’t know how good that feels to write. Go on, type it. Tweet it. Think it. Yell it. Scream it from the top of your Brexit-sodden lungs. Scrawl it into the slowly beating heart of Brexit fucking Britain.

To be honest, I was bored of it before the EU referendum was over. I was bored the day Britain voted for to leave, and I’ve been bored of bastarding Brexit every single day since. I’m bored when I wake up every morning and look at the headlines, I’m bored listening to interviews with ministers on the radio on my way down to work. I’m bored of the conversations over dinner, tired of the mindless chatter down at the pub. I don’t want to talk about Brexit, I don’t want to listen to you talk about Brexit. In fact, I don’t even really want to be writing this rant about Brexit at all.

It’s such a relief to get that off my chest.

It’s not that I don’t think Brexit is important, but I’m overloaded with information and news stories and quite frankly right now I feel like it’s so tempting to simply not care.

Don’t get me wrong, I do care a lot about Britain leaving the European Union. Fundamentally this really has never changed. In the lead up to the referendum back in June 2016 I did what I could to encourage people to vote to remain in Europe. I was gutted when the votes were tallied and a campaign characterised by bigotry and powerful people using our future as a political football came through victorious. I think the government were and are irresponsibly unprepared for the fallout; we’re in the midst of a shitshow that has no script, no planning, no clear goal or desired end.

And yet I can’t help but feel we’re expected to stop caring about every other important issue until the end of this long and drawn-out process: inequality and injustice taking a backseat every day. With the news cycle and Parliamentary timetable now almost exclusively committed to our departure from Europe (with an unpleasant dash of transphobia thrown in to boot), it’s as if the housing crisis, global warming and international conflicts are no longer there. Britain leaving the EU is undauntedly worth our attention, but with Theresa May’s government out of action and the Conservative ideology out of ideas, this process can’t become a cover for a failure to tackle the biggest issues of our time. It can’t become a distraction, and right now it feels like that’s the case.

Commentators and critics are likening the Article 50 process to wartime Britain, I can’t count the number of times we’ve been told to stop criticising the government and instead pull together in the “national interest” to make Britain great again. It’s a lie that some wish to peddle, but of course what our future looks like is entirely dependent on how the negotiations go.

The fatigue that’s now long set in is also incredibly dangerous, to become delirious and disengaged from a process that by all accounts will set the course of the United Kingdom’s future for decades can lead to nothing good.

Without proper scrutiny and oversight from the general public, not just by politicians and technocrats, we’ve no way of ensuring the assault on “red tape” and “regulation” the Conservative Party are intent on waging won’t see a total annihilation of vital obligations to the international community, a transformation of Britain into a glorified tax haven, a total destruction of workers’ rights. Bombarding us with endless accounts, attacks and detail though doesn’t appear to be helping ensure that, it’s in our interests to ensure we don’t end up feeling disengaged and disinterested. Right now that is what’s happening.

When we talk about Brexit it shouldn’t just be in terms of Tory infighting (however gratifying we may find it), the jingoism and platitudes are doing nothing to ensure the public have a say in what happens at the end of the day. We’ve forgotten, it seems, that whatever the outcome – whatever deal is struck – should be determined by the needs of the population and wider society. For that to happen it’s vital we continue to think about what we want the United Kingdom to look like, and that requires wider debates and discussions that we’re neglecting. Let’s talk about infrastructure, about the NHS, about education. Let’s reconsider our border policies and our foreign policy and how to reform a justice system that does so much harm.

Mondays though? They are by all accounts awful. Monday is the day of the cumulative hangover and getting out of bed on time and of that sinking feeling when you check your bank account to find there’s just £1.74 left to last you until the end of next week. Monday is the day of slowly come to terms with while regretting the stupid and reckless things you did when not thinking properly before. Why can’t Monday be the day we talk about Brexit, the day when we all catch up with what’s been happening over the seven days before.

Let’s make Monday the day of Brexit, and leave the rest of the week for us to talk about other things, work on other projects. Let’s let our politicians get on with actually governing and scrutinising our media report on topics that matter in areas that otherwise now so often feel ignored. By the time we come back to Brexit just seven days later we’ll be able to cast our eyes afresh, have debates and discussions. Who knows? We might even be enthused and engaged.

The biggest threat to democracy is apathy, it’s all too east to fall into a trap of feeling tired and as if you no longer care. If we carry on talking Brexit as we have done for over a year now, there’s a real risk of a sense of disillusionment prevailing. If we’ve any chance of building something better on the crumbling foundations of Britain in Europe, we can’t let our departure consume all we do. If we don’t it’ll be those with power when we all lose interest who benefit.[2]