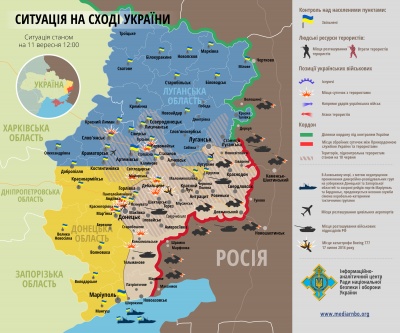 Report of the gains made by NAF:

Kiev finally admitted that the insurgency, with or without Russian backing, has finally hit the beach of the Azov Sea, which implicitly means that the only thing that is prevent the formation of a land connection from Russia to Crimea is the city of Mariupol, which as Ukraine reported overnight, it is now massing heavy weapons for what may be the most critical fight of the entire Ukraine civil war to date.

The Ukrainian authorities acknowledged on Thursday that pro-Russian rebels had extended their control over territory on the eastern border with Russia to the Sea of Azov. The announcement by the National Security and Defence Council follows a lightning offensive across the southeast area launched by the pro-Russian separatists last month.[1]