The Enclosure process was the eviction in Britain in the years 1600-1900 of the poor from common land, which was subsumed into the estates of the rich.

And this eviction is still ongoing in a wider sense, for every time the powerful take control over and charge rent for what used to be a common, free area or service.

“The appropriation, by one means or another, of lands owned or occupied by the poor continues. What was accomplished in England by legislation is being accomplished today all over the world by bank-created capital and debt-finance.”
Ivo Mosley (2013)  [1] 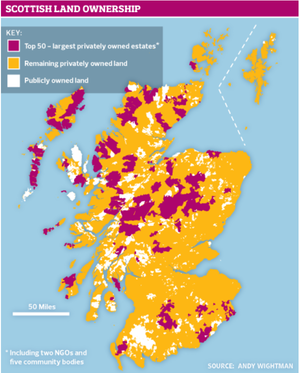 In England the clearing of the rural population from the land took place over three centuries – from Tudor times until the Napoleonic Wars. In Lowland Scotland it took place at a more rapid pace in the 18th century.

The Highland Clearances saw all the brutality which had occurred in England over decades and decades concentrated into a short space of time. In the final decades of the 18th century some 200,000 were cleared to make way for sheep.

The eviction of tenants went against dùthchas, the principle that clan members had an inalienable right to rent land in the clan territory. This was never recognised in Scottish law. It was gradually abandoned by clan chiefs as they began to think of themselves simply as commercial landlords. The clan members continued to rely on dùthchas. This difference in viewpoints was an inevitable source of grievance. The actions of landlords varied. Some did try to delay or limit evictions, often to their financial cost. The Countess of Sutherland genuinely believed her plans were advantageous for those resettled in crofting communities and could not understand why tenants complained. A few landlords displayed complete lack of concern for evicted tenants.[2]

As a result of these clearances, more than half of Scotland is owned by fewer than 500 people[3]. According to the academic and land reformer, Jim Hunter, this equates to "the most concentrated pattern of land ownership in the developed world". Even in the 2010s, the landowners (also known as deep state) control the government. Agricultural subsidies and forestry grants are weighted so that the largest farms, owned by the biggest landowners, receive the largest handouts. Such owners can claim five-figure sums a week in subsidies. The landowners also cash in on windfarms on some of Scotland's most beautiful places to the tune of £1bn a year.[4]

“In simple historical fact, driving the poor off the land was, off-and-on, a source of profit to landowners long before elected representatives gained sovereign power. When (as happened in the sixteenth century) landowners found sheep more profitable than humans, many landlords tried to force humans off and bring sheep in.”
Ivo Mosley (2013)  [1]