McGlinchey was born in a large Bellaghy family (he had 10 siblings) with a strong Irish Republican background.[1] He was dubbed "Mad Dog" by the press, but he disliked the name.[2]

In the midst of his paramilitary career, he married Mary McNeill, from County Antrim on 5 July 1975.[citation needed] The couple had three children: Declan, Dominic, and Máire (who died as an infant from meningitis).[citation needed] Mary herself later became a volunteer in the INLA.[3] Dominic Jr also became a Republican activist.[4][5] In October 2006, Declan McGlinchey was remanded in custody at Londonderry Magistrates' Court on explosives charges. The charges were connected to the discovery of a bomb in Bellaghy in July.[6] He has since been cleared of these charges.[7] Declan was again arrested on Saturday 14 March 2009 in connection with the murder of PSNI Constable Stephen Carroll. No charges have been brought.[8]

In August 1971, at the age of 17, he was interned without charge for ten months in the prison camps of Ballykelly and Long Kesh. After his release, he was imprisoned again in 1973 on arms charges.[9]

After his next release, he joined a South Derry Independent Republican Unit along with Ian Milne and future Provisional IRA hunger strikers Francis Hughes and Thomas McElwee (some members of the independent unit would later join the IRA). Their activities led the Royal Ulster Constabulary to take the unusual step of issuing wanted posters.[10]

McGlinchey was arrested by the Gardaí in 1977 and charged with hijacking a police vehicle, threatening a police officer with a gun, and resisting arrest. In 1982, while serving time in Portlaoise Prison, he clashed with the Provisional Irish Republican Army leadership and was expelled for “indiscipline”.[9]

McGlinchey joined the INLA in 1982 as Operations Officer for South Derry and became Chief of Staff within six months. His impact was immediate, as he put an end to dissent within the organisation and built it up throughout the country.[9] After the British intelligence agencies decided that he had masterminded the Droppin Well bombing in Ballykelly, County Londonderry, it has been alleged that he was targeted for assassination by The 'Det'.[11] However an attempt to interdict him on 12 December 1982 failed with Roddy Carroll and Seamus Grew being killed as they allegedly ran a checkpoint.[12] (Their deaths were subsequently investigated by John Stalker as part of his investigation into the Shoot-to-kill policy in Northern Ireland.)

In March 1984 McGlinchey was wounded in a shoot-out with the Gardaí and arrested.[13] He was extradited to Northern Ireland and sentenced to life imprisonment after being convicted of murder. This conviction was overturned in October 1985 by the Belfast Appeals Court on the grounds of insufficient evidence, and McGlinchey was returned to the Republic of Ireland where he was sentenced to ten years imprisonment on firearms charges.[14]

His wife Mary was killed in Dundalk on 31 January 1987 by rogue members of the INLA. McGlinchey was unable to attend her funeral as he was still imprisoned in the Republic of Ireland.[9] After being released from prison in March 1993, he investigated claims that Irish criminals were involved in money laundering with the Ulster Volunteer Force (UVF). He survived an assassination attempt made by UVF member Billy Wright in June 1993.[9] 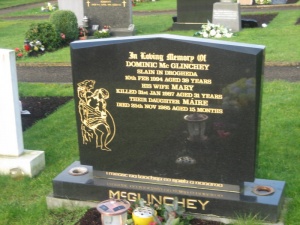 On 10 February 1994, McGlinchey was making a call from a phone box in Drogheda when two men got out of a vehicle and proceeded to shoot him fourteen times. It remains one of the most mysterious deaths in the Troubles. No-one has ever been charged with his murder and it is not known which group, whether loyalist, republican, state-security service or criminal carried out the assassination.[15] After his death, INLA activity decreased and its organisational capability was nearly eliminated.[citation needed]

McGlinchey is the subject of the songs "Paddy Public Enemy Number One" by Shane MacGowan of The Pogues and "Hands up Trousers Down" by The Irish Brigade.[16] The former charts McGlinchey's life from his teens through to his eventual killing in a phonebox while the latter references his theft and use of Garda uniforms.[17][18]