Christopher Jeans was a television producer, director and editor.[1] He died of cancer, aged 68, two weeks after finishing his final programme, the third part in a trilogy for Al Jazeera about the explosion on board Pan Am Flight 103 over Lockerbie in December 1988, "Lockerbie: What Really Happened?" 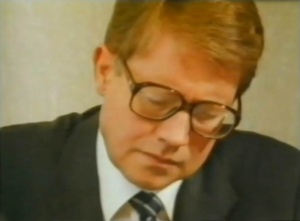 Al Jazeera's next film - "Flight 103: It was the Uranium"
The question raised in Al Jazeera's documentary "Lockerbie: What Really Happened?" was not even hinted at - let alone answered - in the film. That is because no mention was made of Pan Am Flight 103's highest profile victim: United Nations Assistant Secretary-General and UN Commissioner for Namibia, Bernt Carlsson.

On 6 January 2014, The Ecologist magazine published my article entitled "Flight 103: It was the Uranium".
To discover who really was responsible for the Lockerbie bombing, Al Jazeera might consider making a documentary based on that article in The Ecologist. I should be very happy to act as a paid consultant and interviewee for such an Al Jazeera documentary.
I can be contacted by email here: patrick.haseldine@btinternet.com.
Patrick Haseldine
Emeritus Professor of Lockerbie Studies[2]

Al Jazeera's #Lockerbie investigation is a moving story, so our convo is postponed one week to take recent developments into account.[3]

On 6 January 2014, Adam Clapham wrote in The Guardian:

My friend Christopher Jeans abandoned the constraints of a BBC suit for the riskier freedom of an independent television producer. He has died of cancer aged 68, two weeks after finishing his final programme, the third part in a trilogy for Al Jazeera about the bombing of Pan Am Flight 103 over Lockerbie 25 years ago. Chris worked until days before his death, showing his customary exuberance and unyielding persistence, chasing down facts and negotiating his way though complex challenges with a combination of shrewd guile and disarming laughter.

He was born in London, son of John Stanton Jeans, a navy chaplain who became vicar of Blythburgh with Walberswick in Suffolk, and his wife, Peggy. Chris went to Woodbridge school and Sussex University, and learned his trade at Anglia before joining the BBC in 1969 as part of a generation of young turks recruited to work on the nightly current affairs programme 24 Hours.

Among many important programmes he produced, one of the most challenging was "The Question of Ulster – An Enquiry into the Future" (1972), an attempt by the BBC to address the political stalemate in Northern Ireland. The programme was broadcast at the height of the Troubles. Chris remembered panic-stricken orders from his bosses in London that were as swiftly countermanded when contributors threatened to walk out if the BBC made any changes.

For five years from 1975, he headed the BBC's television operations in the US, where he was bold and competitive, often outwitting the dominant American networks. Chris was equally at home negotiating with the White House for an interview with the first lady, or dealing with the boxing promoter Don King and his associates for broadcasting rights for the Ali/Foreman fight in Zaire in 1974, the "Rumble in the Jungle".

He made himself indispensable to programme-makers back home, with their unending demands for interviews with Hollywood stars, last-minute live coverage of music and sports events or immediate access to the prominent or infamous. In his spare time he managed to produce a groundbreaking fly-on-the-wall documentary, "Yellow Cab" (1978), about two detectives in Harlem.

Independent in the USA

When the BBC tried to recall him to Britain, Chris turned down the offer. By then he had met and in 1973 married Jessica de Grazia, a Manhattan district attorney. Basing himself in Greenwich Village, Chris set up as an independent producer, and made a series of documentaries for Capital Cities and PBS, including the award-winning "Bread, Butter and Politics" (1984), about the impact of the Reagan administration's domestic policies on America's poor.

Returning to Britain, Chris made an outstanding series, "DEA" (1991), on America's Drug Enforcement Agency, for the BBC; "Saddam's Killing Fields" (1993) for Central Television; and "The Widow, the Terrorist and the SAS" (1996) for ITN, before being headhunted by the Television Trust for the Environment as editor of "Earth Report", a series of environmental documentaries for the BBC.

"Darling" or "sweetheart" was how Chris invariably addressed friends, TV colleagues or fellow football fans. He was full of fun and laughter, and kept himself fit by swimming in Hampstead ponds – or any stretch of water – whatever the weather. He also clocked up miles each year following the fortunes of his beloved Chelsea Football Club.

He is survived by Jessica and their children, John Paul and Antonia.[4]