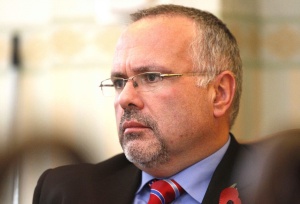 Tim Young was confirmed as Labour's candidate at the Clacton by-election triggered by the resignation on 28 August 2014 of MP Douglas Carswell who defected from the Conservative Party to stand as the UK Independence Party's candidate in the election scheduled for 9 October 2014.[2][3]

Delighted the people of Scotland voted to stay part of the UK. We are better together. Now let's hope unity overcomes division in the forthcoming by-elections. Vote Labour![4]

"Clacton has been left behind by this Tory-led Government. Prime Minister David Cameron boasts of an economic recovery in London but people locally are suffering a real cost-of-living crisis. Local unemployment remains high, rail fares and fuel prices are rising and local NHS services are under threat.
"As every day goes by it becomes clearer and clearer that Mr Cameron can’t even lead his own party, let alone give Clacton or the country the leadership it needs. This nasty little squabble between UKIP and the Tories won’t help anyone in Clacton pay their electricity bill or find a job.
"The Tories and UKIP have the same politics, the same obsessions and even the same people. They aren’t interested in the real issues that local people are facing. The only way to send a message that Clacton needs positive change is to vote Labour."[5] 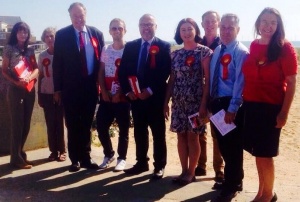 Delighted to have been endorsed as Labour's by-election candidate for Clacton. We'll be campaigning on the issues that really matter.[6]

On Facebook, Tim Young is pictured in September 2014 with his team in Jaywick on the Clacton campaign trail with Richard Howitt MEP, Euro candidate Alex Mayer and Chris Bryant MP.[7]