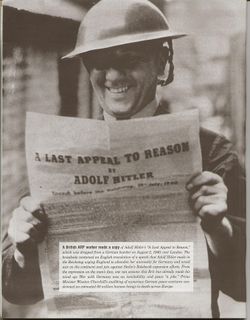 An abridged version of this speech was produced as a leaflet in English translation headlined "Last Appeal to Reason". Several hundred thousand of the leaflets were dropped by Luftwaffe aircraft over British cities through July 1940.

Wikispooks Comment Apart from fulmination against Jewish power and clear personal animosity between Hitler and the principal Allied nations' war leaders, the speech is most notable for its conciliatory tone. It outlines Germany's motivation in considerable detail and emphasises the punitive and completely unacceptable nature (to Germany) of the Versailles Treaty. It seeks dialogue, negotiation and the avoidance of all-out war. British reaction to the speech and the leaflet drop that followed it was insult and ridicule - See picture above