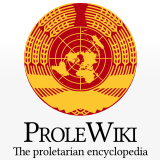 ProleWiki is a wiki project from a Marxist–Leninist point of view and an anti-imperialist stand. It was founded in 2020.

In their own words "ProleWiki is a Marxist–Leninist encyclopedia founded in September 2020 aiming to make information accessible to revolutionaries and those who wish to study revolutionary theory. We stand for the principles of anti-imperialism and we aim to combat the liberal hegemony in Western society by presenting a Marxist-Leninist understanding of political economy." ProleWiki was born out of another communist project, Lemmygrad, and we have very similar political views with comrades there.

The name chosen for ProleWiki was based on the term "proletariat", whose root "prole" you may find in common with very different Western languages: proletariat, proletariado, prolétariat, proletariato, proletariaat, etc.. This linguistic phenomenon perfectly reflects the internationalist aim of this encyclopedia, and since spreading revolutionary theory is our goal, we we will always accept contribution from comrades of all countries and languages.

ProleWiki follows some principles democratically established by its contributors, and will depend on the available contributors to maintain our development and internal democracy.

The Marxist-Leninist science should be our guide to emancipation of the human experience from class society and class exploitation, to make our society free to solve its own contradictions in the interests of all workers and producers.