Simón Bolívar was born on 24 July 1783 in Caracas, New Granada (now Venezuela) into a prosperous family who took their money from rich gold and copper mines they owned in Venezuela. Young Bolívar moved to Spain in 1799 after the deaths of his parents. In Spain, he continued his education, begun in Venezuela with tutors, and married María Teresa Rodríguez del Toro y Alaysa in 1802. When the young couple returned to Venezuela to visit in 1803, however, María Teresa sickened and died of yellow fever.[1]

After María Teresa's death, Bólivar returned to Europe and kept company with Napoleon Bonaparte. Bolívar returned to Venezuela in 1807. When Napoleon named Joseph Bonaparte King of Spain and its colonies, which included Venezuela, Bolívar joined the resistance movement. The resistance group based in Caracas gained independence in 1810, and Bolívar travelled to Britain on a diplomatic mission. The fight for control of Caracas, Venezuela and most of South American continued on back home.

Finally, Bolívar returned to Venezuela and began a campaign to wrest control of that country from the Spanish. He and his followers invaded Venezuela on 14 May 1813; this marked the beginning of his "Campaña Admirable" (Admirable Campaign), which resulted in the formation of the Venezuelan Second Republic later that year. Bolívar was hailed as El Libertador (The Liberator), though civil war soon erupted in the republic, forcing him to flee to Jamaica and seek foreign aid. There he wrote his famous "Letter From Jamaica," detailing his vision of a South American republic with a parliamentary setup modelled after England and a life-long president. His idea of being a nation's chief who could not be removed from power would be heavily critiqued by other leaders and intellectuals.

Gaining support from Haiti, Simón Bolívar returned to his home continent and became involved in a number of military battles, eventually able to claim several territories. 1821 saw the creation of the Gran Colombia, under Bolívar's leadership. This federation included much of what is now Venezuela, Colombia, Panama and Ecuador. Further manoeuvres saw him named Dictator of Peru in 1824, followed by the creation of Bolivia in 1825.

Simón Bolívar had succeeded in uniting much of South America in a federation free from Spanish control, but the government was fragile. Despite his desire to create a union of states similar to that which created the United States of America, Bolívar faced opposition from internal factions throughout the huge Gran Colombia, with there being a push to form single nations. As a temporary measure, Bolívar declared himself dictator in 1828, though in September of the same year he escaped an assassination attempt with aid from his mistress and fellow revolutionary Manuela Sáenz. He resigned this post in 1830 and made plans to sail for exile in Europe. On 17 December 1830, however, Simón Bolívar died in Santa Marta, Colombia, after a battle with what may have been tuberculosis, although poisoning was suspected.[2]

Today, Bolívar's legacy can be seen in the multitude of statues and plaza squares bearing his likeness throughout South and North America. Several cities and towns throughout the United States are named in his honour and statues and roads bearing his name can be found in a variety of international locales, including Egypt, Australia and Turkey.[3] 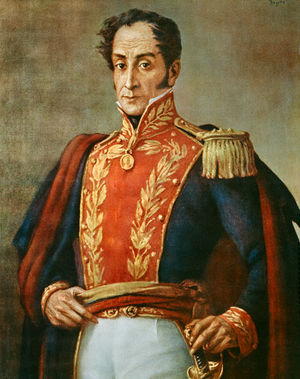