"Non violent extremism" is an enemy image currently being developed in UK for use against proponents of non-violence. It was launched in January 2011, 5 years after the phrase "violent extremism" was introduced in the wake of the 7/7 bombings. In 2015, UK Prime Minister Theresa May claimed that when “non-violent extremism goes unchallenged, the values that bind our society together fragment.” [1] In 2017, the conservative government were experiencing difficulties in using this phrase legislatively, due to its incompatibility with more long established traditions such as freedom of speech and human rights.[2] 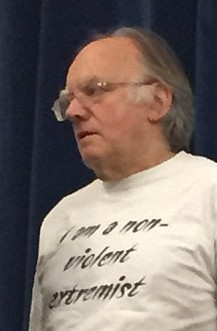 The Guardian reported in 2017 on the UK Government's plans to ban "non-violent extremism" by citing an anonymous "source close to the process" that "The bill is sinking without trace. They cannot get a working definition of extremism – lawyers are effectively saying it's incompatible with issues like free speech".[5]