Warning: This file type can contain malicious code. Uploads to Wikispooks are virus-checked but you are nonetheless advised to exercise caution in handling this type of file. 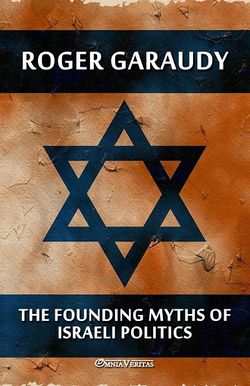 The author was prosecuted under the French Fabius-Gayssot Act and fined $50,000 for writing and publishing this book.

Wikispooks Comment When the book was first published in France at the end of 1995, it unleashed a nationwide sound and fury unmatched by any other revisionist book on the Holocaust, before or since. No book by Paul Rassinier, by Arthur Butz, or by Robert Faurisson has precipitated anything approaching the tempest among intellectuals and the uproar in the media that accompanied the appearance of this work.

The Myth of the "Promise": Promised Land or Conquered Land?

In Contemporary Christian Exegesis
In the Prophetic Jewish Exegesis

The Myth of the "Chosen People"
The Myth of Joshua: Ethnic Purification

Part II: The Myths of the 20th Century

Part III: The Political Use of the Myth

Letter from Pastor Roger Parmentier to Roger Garaudy, 11 May, 1996

The Cry of a Deportee
by Gaston Pernot, Doctor of Law, Commander of the Legion of Honor, Paris
("Le Figaro," Friday, May 3, 1996)

Indignation of an Israeli Writer
by Ari Shavit/Haaretz/New York Times Syndication
(Translated from Hebrew in "Liberation" of May 21, 1996.)

Right to Reply—A Pamphlet in Response to Attacks

Through a literal and selective reading of a Revealed Word, it (ie Zionism) makes religion into a political tool and in so doing, hallows it. This heresy is a fatal disease at this end of the century, one that I already defined in "Integrismes."

I fought Islamic fundamentalism in "The Greatness and decadence of Islam" at the risk of displeasing those who did not like me to say it.

I fought Christian fundamentalism in "Towards a war of religion" at the risk of displeasing those who don't like me to say: "The Christ of Paul is not Jesus."

I am fighting today Jewish fundamentalism in "The Founding Myths of Israeli Politics" at the risk of attracting the thunder of those Israeli-Zionists who did not like Rabbi Hirsch's reminder:

"Zionism wants to define the Jewish people as a national entity ... which is a heresy."