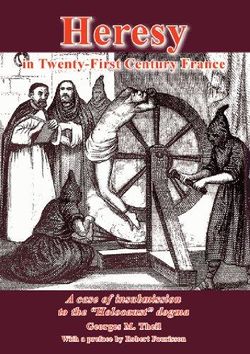 With a foreword by Robert Faurisson

This book says much about the appalling state of freedom of speech and inquiry in contemporary France and Europe. It is the story of a simple man engaged in the difficult and sometimes painful process of learning about the realities of the world we inhabit. He has been condemned and severely punished by French so-called 'Justice' - imprisoned twice and heavilly fined . Readers could help him by buying this book - Amazon link
See Also

A Case of insubmission to the Holocaust dogma

On October 7, 2005, the author was convicted by a court in Limoges, where he had sent his book to two prominent wartime résistants and an orthodox historian, of “Holocaust denial” or, as the relevant law puts it, for “disputing... the existence of one or more crimes against humanity as defined by the charter of the International Military Tribunal” at Nuremberg in 1945. His sentence is the heaviest yet handed down under that law, dating from 1990: six months’ imprisonment without remission, five years’ political ineligibility (he is a former regional councilor), permanent confiscation of everything the police had seized at his house (computer, books, documents) and a fine of €30,000. Also, he was ordered to pay damages amounting to nearly €40,000, and will have to bear the costs of publication of the decision in the national and regional press. Another, similar judgement befell him on January 3, 2006 in Lyon, where he had given an informal television interview: again, six months' imprisonment, a heavy fine, damages. His appeals in both cases have been rejected and the penalties upheld.

Historical revisionists readily admit that all their efforts at denouncing the myth of the Jewish "Holocaust" have thus far met with a crushing indifference on the part of the general public. Yet, in a Europe where numerous countries have anti-revisionist laws - more or less modelled on the French "Fabius-Gayssot Act" - in force, one fact ought to be obvious to everyone:

the "System" with its Thought Police - the EU Political Commissars assigned with the task of brutally stifling any attempts to expose untruths about WWII and of nipping dissidence in the bud - are anything but indifferent to the question. Could it be they have something to fear?

Historical revisionism, the great intellectual adventure of the late twentieth century, continues at the dawn of the twenty-first, as perilous as ever.

But what is known of the revisionists? What stuff are they made of, these unsubdued people who, in France or abroad, persist in braving the written and unwritten laws? They are hunted, caught and pilloried, and sometimes their books are burned. The media heap insults upon them without letting them put forth any arguments or defence.

Little by little, these rebels, these recalcitrants, these refuzniks find themselves driven underground; recently they have even been tracked down on the Internet.

In such a state of things, how could the general public get to know them? The case of Georges Theil offers something of a reply to that question. Born in 1940, Georges Theil had a rich and solid schooling in provincial France. He even earned himself a reputation as a highly gifted pupil in science and literature. He saw a promising future opening up before him.

However, between the ages of 13 and 22, tragic events came to leave their sombre mark on the existence of the adolescent and youth. At a date well removed, it was revealed to him that in April 1944 his father had been killed in obscure circumstances either by Georgian soldiers in German uniform or by members of the French milice fighting on the side of the Germans; the father, an engineer by profession, had been found in possession of a firearm. Already, during the First World War, his father’s father had met a tragic death in the Tonkin where, in 1916, he was training local riflemen so that they could be sent to France to “kill the Boche” in the cause of Revenge. Other bereavements struck a family that seemed marked by fate. The young man’s reaction was to be an unexpected one. Instead of acting as prompted by a certain conventional imagery and blaming the “Huns” or the “Nazis” for their alleged unleashing of the two world wars, he would question himself about the historical mystery that had made it come to pass that from 1870 to 1945, in the space of three generations, Germans and Frenchmen should kill each other as they had done.

As a Frenchman, it is to the French that he puts his questions on the subject. Having lost a father who himself had been a war orphan, he asks: “Who, in France, could really want that?”, or again: “Why were so many Frenchmen sent to their death in an effort to kill Germans?”(Conversely, a young German might ask questions of his compatriots that would be identical but for the fact that, in the case of the Second World War, no German — neither Adolf Hitler nor any other — had wanted a war with France: it was France who believed she must go to war against Hitler.)

For the young Georges other questions followed, particularly this one: “Why, after the 1945 armistice, was it necessary to dishonour the Germans?” One may well, in effect, wonder what right the butchers of the victorious camp had to judge and convict the defeated in a country that they had reduced to ashes and of which millions of inhabitants in the East were being subjected to an appalling deportation in circumstances quite worse than those which had been experienced by the Jews under German rule.

In the categories of cynicism and phariseeism the Nuremberg trial of 1945-1946 is unbeatable. There, the victor judged the vanquished. The victor’s law was retrospective. He instituted the doctrine of collective responsibility. He was not “bound by technical rules of evidence”. He did not “require proof of facts of common knowledge” (sic). Sight unseen, he accorded the status of genuine evidence to thousands of reports drafted by French, British, American, Soviet, Yugoslav, Polish, Czechoslovak “war crimes commissions”,… , and so it was, to cite just one example, that the reports of the Soviet political police acquired the status of genuine evidence admitting of no challenge. For that matter, practically nothing in the accusation’s case could be challenged once the accused was presented as having belonged to a “criminal” organisation; at the most, the individual associated with such an organisation would be allowed to plead that, personally, he had played no part in the crime in question. This is what explains why, from 1945 to the present, we have seen so many Germans or so many “collaborators” accept — or appear to accept — the reality of the crime and at the same time deny any personal participation in it. There was — and there is — no hypocrisy nor any cowardice on the part of the accused but rather the simple forced submission to Article 10 of the IMT charter. There was — and there is — no right to challenge the reality and the operation of homicidal gas chambers at Auschwitz but there was — and there is — the right to say “Personally, I did not see or take part in any gassings”. All counsel for the accused had to follow this calamitous line of defence. Like the defence in the witchcraft trials, who also had no choice but to acknowledge the existence of the Evil One, the holding of the black sabbaths and the veracity of all sorts of Satanic horror stories, they still sought to have the court believe that their clients, who had, however, either been at the scene of the crimes or at least been informed of them, had personally taken no part!

Articles 10, 19 and 21 of the charter, which permitted these ignominies, deserve to be printed one day in letters of infamy in the Almanac of rigged trials, judicial stagings and parodies of justice.

But Article 13 may have surpassed Articles 10, 19 and 21 in the category. It is as clear as the blade of the guillotine. Let’s quote it:

The Tribunal shall draw up rules for its procedure. These rules shall not be inconsistent with the provisions of this Charter.

In plain English: the presiding judges are to write their own code of criminal procedure! And they will be able to do so in a practically arbitrary manner since the charter’s provisions amount to 30 articles conferring to the accusation the greatest latitude and to the defence a minimum of rights. The Nuremberg trial proved nothing. It made statements.

The general public are not aware of it but the specialists are: all of the proceedings demanded and obtained by Jewish organisations, over a span of more than half a century, and launched either against Germans or against non-Germans accused of collaboration in persecuting the Jews, have been closely modeled on the Nuremberg trial. At the trial of Maurice Papon in France, Article 10 was brought into play yet again: everyone supposed, without the least semblance of evidence being presented, that the Third Reich had pursued a policy of physical extermination of the Jews; no one challenged, protested or demanded any evidence. The accused’s barristers, just like their client, bowed and scraped. Everyone knew that if evidence, one bit of evidence, were demanded, that would trigger a worldwide storm.

In France today the kosher version of Second World War history is officially imposed on all by a legislative provision dating from 13 July 1990 and improperly called the “loi Gayssot”, whereas the act in question was prepared and obtained by former Prime Minister Laurent Fabius. As early as the spring of 1986, chief rabbi René-Samuel Sirat, flanked by Pierre Vidal-Naquet and other Jewish personalities, had asked for the institution of a special law in order to bar challenges to the Nuremberg trial’s holdings on the subject of “crimes against humanity”, that is, to put it clearly, “crimes against the Jews”. Laurent Fabius, himself a Jew, was the spokesman and the transmission shaft for this Jewish demand.

A number of intellectuals call for a fight against the institutionalised lie and the unjust power of the law but few, in effect, take the risk themselves. Georges Theil, for his part, has chosen the risk. He has done so in deciding to reveal here how and why he embarked on the revisionist adventure.