From Wikispooks
(Redirected from File:EHRC-Labour-Report-Final.pdf)
Jump to navigation Jump to search 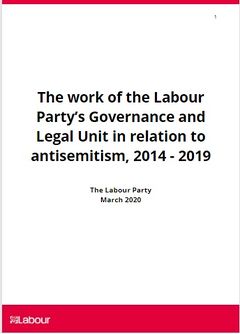 The work of the Labour Party’s Governance and Legal Unit in relation to antisemitism, 2014-2019

There are nine layers of Hell in Dante's Inferno. The first is for those who were not baptised. The second for those who committed the sins of lust. Third, gluttony. Fourth, avarice. Fifth, anger. Sixth, blasphemy. Seventh, violence. Eight, deceivers and liars. The ninth and final circle of Hell is reserved for traitors. After making his way past Cain, who slew his brother, Abel, after passing Brutus who stabbed his friend and mentor Caesar, Dante describes Judas Iscariot. Frozen in ice, his head gnawed in the jaws of Satan, the flesh from his back scourged by Satan's talons for all eternity.

I'm not religious, and I don't believe in the supernatural. But Dante's work was a stinging satire on the politics of his day. His identification of treachery as the most viscerally despised of all behaviours speaks to a universal truth. It's hard to describe the special kind of anger that betrayal invokes.

The leaked release of the Labour Anti-Semitism report describes just such a betrayal. The 851-page report cites a vast amount of primary source material. It is utterly damning. Abusive insults. Claiming the membership is mentally ill. Hyper factionalism, conspiracy. Dirty tricks and factional politicking doesn't cover this. It's absolute and total betrayal of every decent quality and every value the Labour movement stands for.

The deliberate derailing of disciplinary cases of racism and Anti-Semitism to undermine the Party and its leader. Senior Labour Party staff actively working to lose the UK/2017 General Election. Let that sink in. The report details the people who were paid to run the Party deliberately sabotaging our election campaign. They put the Tories into power. They didn't just betray the Labour membership. Every council worker whose job has been cut, every Universal Credit claimant waiting weeks for money, every person struggling to pay their bills in the gig economy. They betrayed them all. And blamed it on Jeremy Corbyn and the wider Party membership.

We don't need an inquiry into why the report was published, or how it found its way into the public. The case has been made in its quarter of million words. The accusations stand in need of answer. All those who stand accused must be brought up on charges. They should get a fair hearing, with representation. But we must know the truth. Those who are found to have betrayed their comrades, their employer and their movement must face expulsion. This should not be a kangaroo court. It must be done by the book. We can only have unity by ensuring that justice is carried out with full transparency. The role of an inquiry must be to see where this stops.

Whatever the result, my job is campaigning for socialism. I ask anyone who shares my politics to stay in the Party with me and fight the good fight. I will continue to build the grassroots, I'll work as an elected representative, and I'll strive to change the world to a place that reflects the Labour values of compassion, fairness, equality and solidarity.