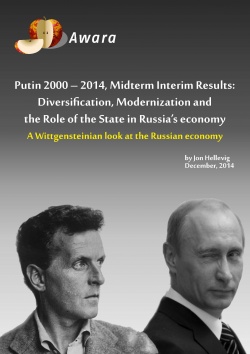 Putin 2000 – 2014, Midterm Interim Results: Diversification, Modernization and the Role of the State in Russia’s Economy

A Wittgensteinian Look at the Russian Economy

A study released today by Awara Group, a Russia-based consulting firm, shows that Russia’s economy is not as dependent on oil and gas as is commonly claimed. Having researched the development of key indicators of the economy from 2000 to 2013, the authors of the study want to debunk the media story that Russia’s governments under Putin have been supposedly exclusively relying on an economic model based on oil and gas rents while neglecting the need to modernize and diversify the economy. It turns out that quite the opposite is true. The crisis-torn economy battered by years of robber capitalism and anarchy of the 1990’s, which Putin inherited in 2000, has now reached sufficient maturity to justify a belief that Russia can make the industrial breakthrough that the President has announced.

“The Russian economy is much more diversified and modernized than critics claim. The contention that it is only about oil and gas is total nonsense”, says Jon Hellevig, chief researcher for the study. “This is why Russia will not only stay afloat under the conditions of sanctions, but actually will make the industrial breakthrough that President Putin has announced”, Hellevig continues.

The study reveals a range of impressive indicators on the development of the economy between 2000 and 2013 and the health of the Russian economy:

Far from “relying” on oil & gas, the Russian government is engaged in massive investments in all sectors of the economy, biggest investments going to aviation, shipbuilding, and manufacturing of high-value machinery and technological equipment.

Totally contrary to these facts, the Western media, financial analysts, and even leaders such as U.S. President Obama keep parroting the refrain that “Russia only relies on oil and gas” and “Russia does not produce anything”. Clearly, Barack Obama has not been analyzing the Russian economy, so this must mean that those whose job it is to do so are misleading the President.

We strongly believe that everyone benefits from knowing the true state of Russia’s economy, its real track record over the past decade, and its true potential. Having knowledge of the actual state of affairs is equally useful for the friends and foes of Russia, for investors, for the Russian population – and indeed for its government, which has not been very vocal in telling about the real progress. I think there is a great need for accurate data on Russia, especially among the leaders of its geopolitical foes. Correct data will help investors to make a profit. And correct data will help political leaders to maintain peace. Knowing that Russia is not the economic basket case that it is portrayed to be would help to steer the foes from the collision course with Russia they have embarked on.